Sakura Earns a Customer for Life

I've been a happy customer of Sakura for the better part of two years now and it seems that my loyalty has actually paid off in a really big way … although not directly due to how long I've had an account with them. Earlier this year Sakura started phasing out their lower tiered VPS services in order to make room for another higher tier in their four-choice brackets. When they did this, they also bumped up everybody's virtual servers to the next level up, as the prices for each their remained the same. That means that across my 6 virtual servers, I managed to score an extra 4GB RAM and over 700 GB of extra disk space. But that's not the best part.

Zero Work On My Part

The most impressive aspect of this entire upgrade process has been the fact that I haven't had to lift a finger. The company sent out email notifications in March, April, and two weeks before the update to let everyone know exactly what was going to happen and when. They asked that everyone make a backup of their instances in the event something goes terribly wrong and let us know that we shouldn't have to do anything to receive the updates. They would be rolled out automatically at 7:00 AM Japan time on May 31st. All of our virtual machines would be shut down and then brought up again with the new resource limits.

And this is exactly what happened.

My sites were down for a grand total of 4 minutes while everything rebooted, resynchronized, and reconnected. Once done, the servers started communicating with each other like nothing had ever happened, and I was gifted with double the RAM in each and every instance. Beautiful.

The disk space is still the same, though, and I'll need to destroy the instance and build a new one to get the full amount of storage, but this really shouldn't be necessary as I only store logs and the websites themselves on the servers. Images and other media are stored elsewhere. All in all, this was a completely painless upgrade and it couldn't have gone any smoother … which is why I've recommended them to everyone I know who's looking for a reliable web server in Japan. Unfortunately, they don't have any referral promotions1, but they do have some excellent prices for virtual servers with no extra charge for bandwidth.

Here's a quick breakdown of their virtual server offers: 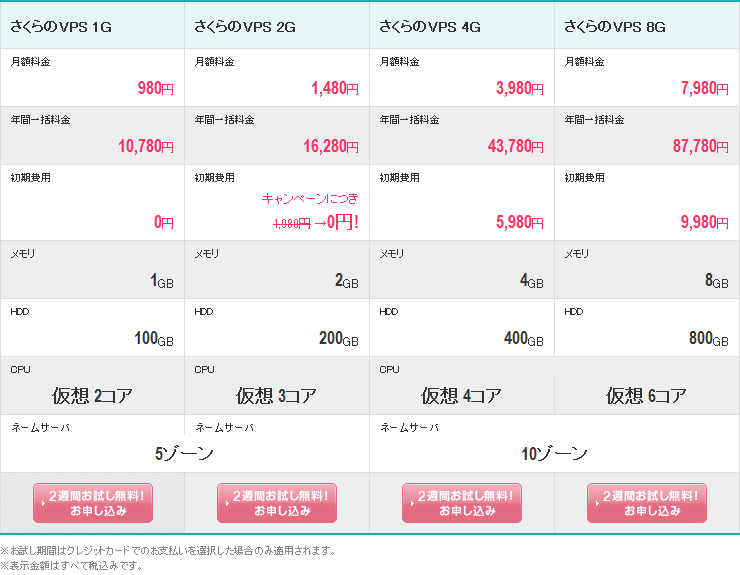 So, even though I don't really have any incentive to say so, if you're looking for some incredibly reliable VPS services in Japan, you can't go wrong with Sakura. They don't have service in English, but even this can be worked around with a little bit of machine translation in the purchase process if you get lost.

Feel free to ask me any questions about the service, too, as I can probably give you the answer you're looking for. I haven't worked with anyone at Sakura, but I've pushed their servers hard enough over the last few months to know what can and should not be done to them.

Note: This is not a sponsored post. I'm just really, really happy with these guys right now.

Alright … it's taken just about 10 hours, but I've managed to upload about 400 pictures to the image galleries again.

With the migration of my webserver, I had determined it would be better to re-upload my picture gallery than just import the backup. This was for many different reasons, not the least of which being the image resolutions. One of the nice things about re-uploading all these pictures is that I've been able to add more than was originally posted. Last time, there were close to 250 images in the galleries.

I'll see what I can do to put some of my older pictures into the gallery, but the image quality for those shots is really low. These images would have been taken either with my first digital camera (a 3.2 MP device in 2002), or the camera I borrowed for a while a few years ago (a 2.0 MP Canon). One thing I have noticed about most of my pictures is that they suck. Often times I take pictures of what most people would describe as "nothing". To this end, I'll make sure that my future pictures are more audience friendly.

Hopefully this will be the last post regarding my website. Most people will notice that the address has changed, but the old one will forward you here. The Japanadian.net link will continue to forward to this page also, as that was it's main purpose.

I guess this means I can get back to talking about some current events, my upcoming wedding, and the occasional philosophical entries where I try to rationalize or justify something.

Alright, after several hours of exhaustive work, data imports, image imports and directory permissions … it seems that my site is mostly back to normal.

It appears that when my database crashed the other day, it was the result of a larger problem that I did not properly identify. After getting the system to partially work again, I decided to stop trying to band-aid the problem and start from scratch. I chose this method not because of my extensive Windows experience, but because of what I've learned over the last few months about my web server, as well as WordPress (the software that this site uses).

One of the advantages to starting with a clean slate is that I could change many of the initial settings I had configured, without damaging anything. Importing my old information was mostly simple (there were only a few custom plugins that I couldn't recover data from), and after a bit of testing, re-uploading my images has proved a positive experience. One of the things I did not like about my last site was the small size of the photo gallery pictures. After increasing the size, I found that the initial images were blurry and otherwise terrible, so I deleted them all and started to re-upload the albums. The image quality is now much higher and, hopefully, people will enjoy some of the photos more.

Of course this makes me wonder if it's time to get a better camera….

Over the next few days I'll be re-uploading a few hundred photos to the image galleries, and I'll even give this site a make-over to ensure w3c compliance. I'm seeing that most of the people that visit me use either FireFox or Netscape, so it's time I ensure their viewing the pages as I intended with IE.

Server Upgrades and Some Unexpected Complications

For the last two days I've been slowly upgrading my web server, and I must say, there have been some unexpeted complications.

Only twice has my site gone down due to unforseen hiccups in the update process. These updates weren't software-related failures, but instead, hardware capacity failures. It seems that my site attracts lots of attention from data-mining bots. When my site is under heavy load from them (more than 4 hits in 10 seconds, give or take), most of the server's resources go towards Apache and MySQL, which leaves very little room for other operations.

Yesterday I had connected a new hard drive to the server and I was copying over quite a large amount of data. Unfortunately, this caused some problems with the heavy internet load and caused my server to freeze! This is almost unheard of on Linux servers, but when they just don't have the resources to run effectively, they can starve and freeze just like their Windows cousins. 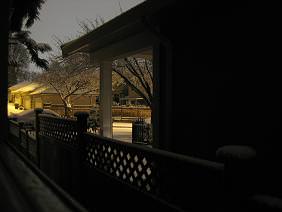 So … after lots of work and patience, the update is complete. This site shouldn't be going down any time soon, and now that I have the extra space, I'll be uploading lots of the pictures from my trips as well as some from around the area. I guess this means that I could be a tourist in my own city for a bit, since I've had many requests to take pictures of this area. With the snow all around, some of the shots might turn out quite well!

Server Back Up and Running!

Sorry about the server down-time, to anyone that tried to connect this morning. It appears that some database issues caused a crash on my server, and this affected all the sites being hosted. I've corrected the matter and we should be good to go, now.

Thanks go to Reiko for letting me know about the problem. :)

Not The Box I Was Expecting

Okay, I've had this NAS running for over a week now, and I must admit that it's not quite what I was expecting. I guess it's a good thing I didn't rush out and buy matigo.net … because it seems that people can only access this site when my router has been recently reset.

Since buying a new router is out of the question right now, I guess I'll have to keep these entries short and to the point. Of course this is just a little hiccup that'll eventually be resolved. I still want matigo.net :P

LAMP Up And Running

Yesterday I received my new NAS (Network Attached Storage) and LAMP (Linux, Apache, MySQL and PHP) box while at work. It's nothing spectacular, just a simple Synology DS-101j, but it certainly gets the job done and has some pretty cool features considering it's the size of a standard 3.5" HDD enclosure.

Over the next few weeks I'll be updating this to be much more personalized, and eventually it'll have pictures from my trips to Japan, Victoria and around BC (I guess that would be Whistler, and my work).