At some point in the last year of App.Net, I stumbled upon KritzelKomplex. It's an independent German comic that has since been renamed KPLX1, and it features a cast of very cute worms that provide commentary on the world we live in. At some point some of the comics seemed to be "open to interpretation" and, not wanting to let the Creative Commons license the comics are under go to waste, I decided to blank out the speech bubbles and insert my own commentary. I called them "remixes", and most centre around Star Trek in some fashion. This was the first one I shared:

Not particularly funny, but I thought it was a nice take on the J.J. "Sparkle Trek" that has reshaped many people's opinion of Star Trek. Other short strips poke fun at the CBS lawsuit against Axanar and the "new rules" around fan-made productions, comment on the recent Pokemon craze, or mirror the fevered panic that permeates the news industry. But some of my favourite strips are just silly. Like this one:

If you think this one looks familiar, it's because it was also used for the fan-made Star Trek productions above. Clippy was added and the rest of the story pretty much wrote itself.

Recently there haven't been too many of these remixes made, primarily because the concepts I had planned were all politically motivated and that's a subject I'd rather leave to others. The reworking of these strips can certainly touch on topical subjects, but why spoil a perfectly good comic with comments about Brexit, Trump, Le Pen, or Trudeau2 when one can riff on Star Wars fans?

Much of my humour makes use of obscure references that only a small group of people might pick up on, but today's remix was a little different. Something that's been bugging me for days has been Bill Cosby's sexual assault mistrial. A lot of people have over-simplified the case as a "he said, she said", but nearly five dozen women have come forward in the last few years to say that Cosby has done some pretty horrible things to them. The likelihood of this being "just a misunderstanding" or "a post-intercourse revocation of permission" or "the actions of a woman digging for gold" is absurd and the way the victim was portrayed in court, by some of the press, and by armchair lawyers on the Internet denigrates all women who have been subject to abuse and rape from famous assaulters. It just seems that, regardless of the mountain of evidence that might be produced, powerful men who think with their penis can get away with assault just because they earned millions by being an actor or an athlete.

So I remixed this original comic to this: 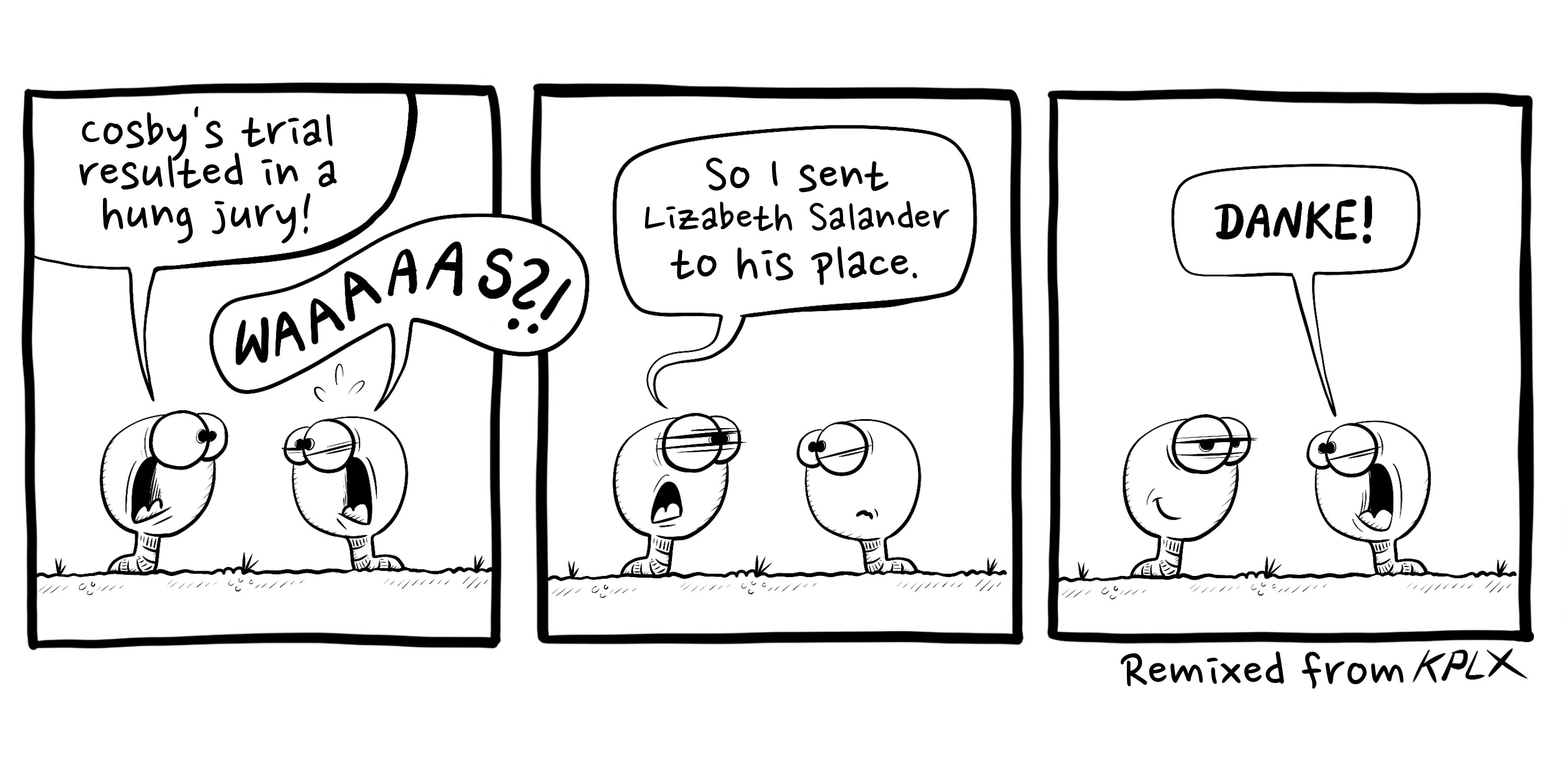 It actually felt good to get it out there. It felt good to see these two worms say something that a lot of others would probably agree with. And while I do not condone violence, I do appreciate the idea of justice. This simple, three-panel strip with its obscure literary reference communicates more in seventeen words than all of the words in this blog post.

I should do this more often.

If you haven't already, do check out KPLX. It's really funny and, even if you don't understand German, the expressions on the characters faces are worth seeing. The artist3 also has a Patreon page so, if you can spare a few dollars a month, it'd be great to support and encourage more of this person's work going forward.

As for the remixes, I'll continue to make them, though most will be visible only on Nice.Social, which you can find under the hash #KritzelRemix.