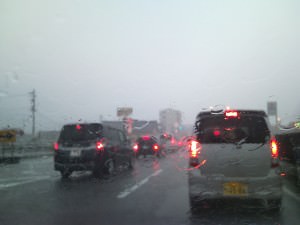 The skies certainly opened up today.  While on the way to get some kanji textbooks, the Mrs. and I ran into some pretty heavy rain.  At some points visibility was down to just 50 meters.

Good thing the car's wipers work.  The last time I encountered this kind of storm was back in Canada when I was driving a '95 Dodge Ram Van with windshield wipers that would only work on sunny days (seriously).