Earlier today my sister sent me a photo that, while undated, would have been taken in 1985. Based on all the things that happened that year, the photo may have been taken in late August or early September, shortly after my father collected Christine and I from the foster home where we were staying after our mother left. My youngest sister at the time is not in this photo as she would have either still been staying with an aunt or had just recently been retrieved by my mum1. 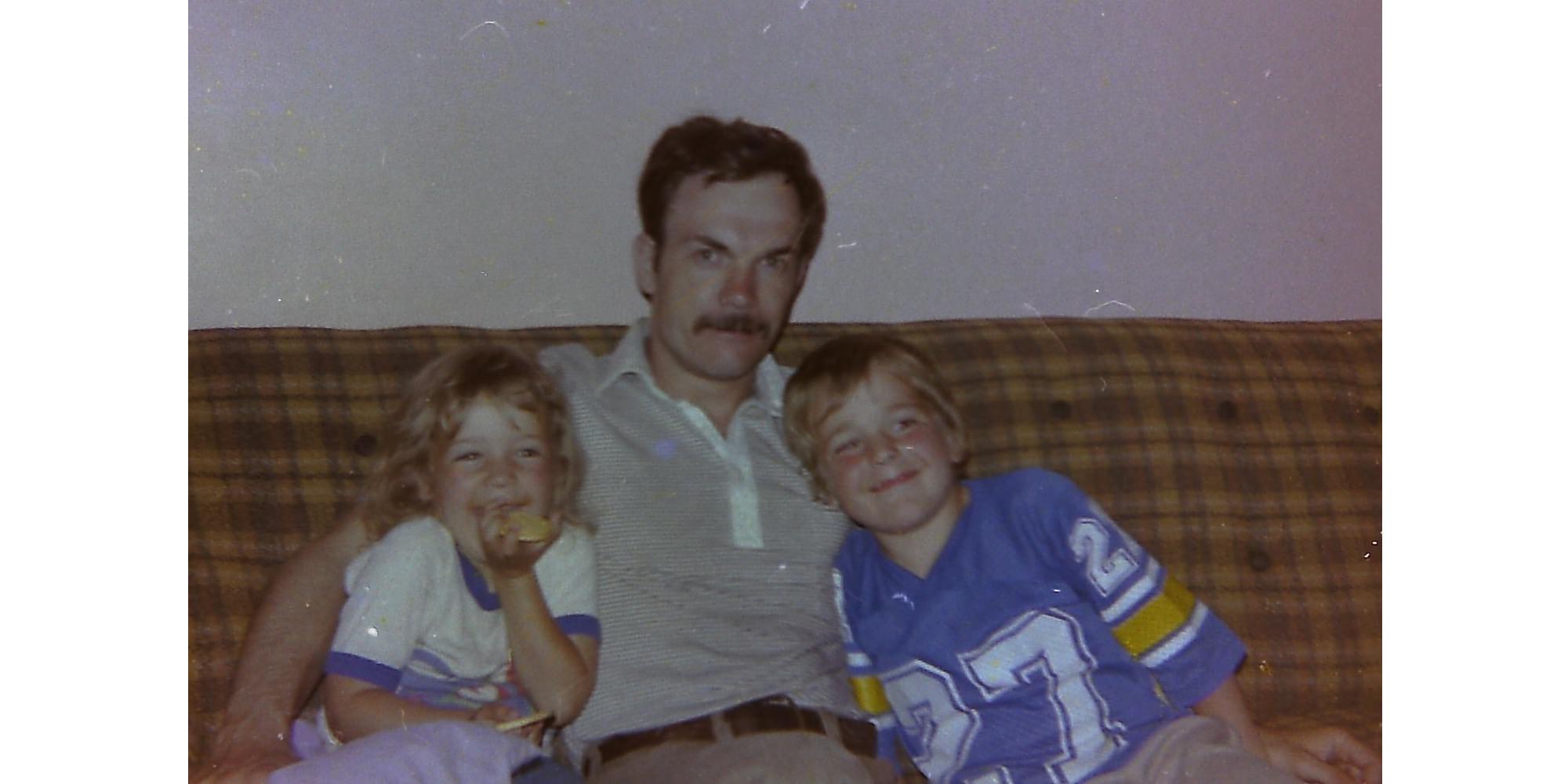 What immediately strikes me about this photo, aside from how thin we all are, is that only my father is looking at the camera. Christine and I are looking off to the side at someone else. I know it has to be a person we're looking at because the photo was taken in the 3-bedroom apartment we moved into shortly before I started attending elementary school2. The person who took the photo would have been standing directly in front of the table where we had a 12" black and white TV3. Whoever we were looking at would have been sitting at the dining room table, as that would have been the only other furniture in the apartment at that time. Judging from the grin on my face and Christine's exuberance, I have a feeling it was either my mother — who my father always allowed to visit us despite whatever feelings he may have harboured — or her brother Leo. Unfortunately, my memory of that day is practically non-existent.

Photos were not all that common in my family before the advent of the "camera phone"4 so, for this picture to exist, there must have been some occasion to celebrate. My son hasn't gone a day in his life (outside the womb) without at least one photo being taken. Will he one day look back at these digital memories and remember a simpler time? Will he wonder why there are so few pictures of him and I together but thousands of him with his mother?5 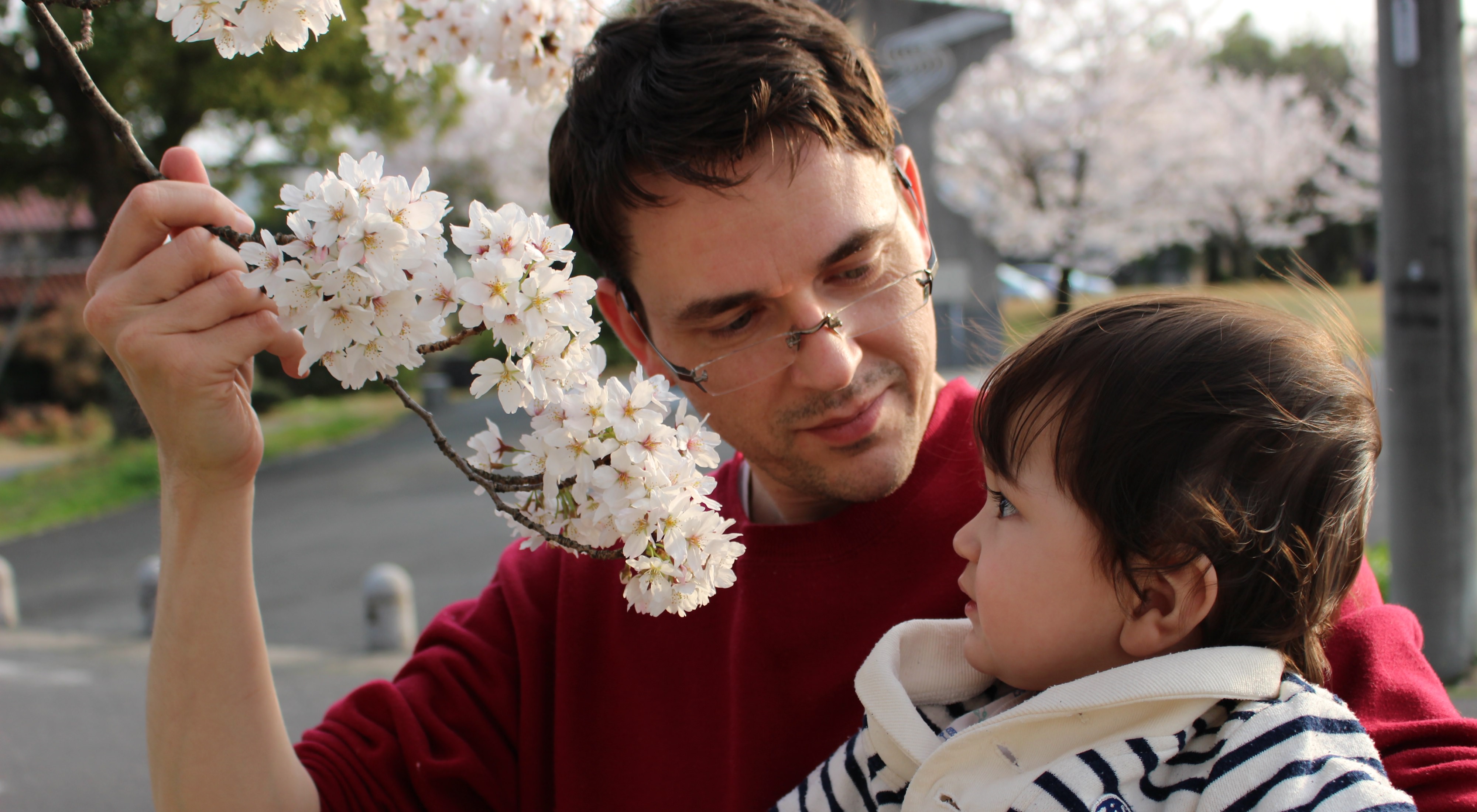 There's no way to foresee the future and how the boy will remember his early years, but I do hope that if he looks at these pictures, he sees that I'm just as invested in him as my father was in his children.

Far more pictures have been added to my photo gallery in the last twelve months than at any other point in my life as I've finally had access to a camera that was portable enough to always carry, as well as provide enough clarity that I actually enjoy looking at the results. Although I am no professional at photography1, I do enjoy grabbing images from wherever I might be if the light is just right. This was the case the other night when Nozomi and I were walking through the park at night and I looked up in search of a single star in the night sky2.

I thought the light refracting off the humidity was interesting and decided to snap some pictures. First with the camera application that ships with iOS, and the second with CortexCam, a long-exposure application that merges several images into a single cohesive picture. Here are the results:

As you can see, the default application is full of artefacts and fuzz. No fun at all.

The CortexCam photo is much, much better. There are still no stars to be seen … but the city light refracting off the humidity can be seen and understood. I've taken a lot of photos with CortexCam and been pleased with the results.

I've assembled a bit of a gallery, and I'll put it online soon.

Since getting my hands on a 5th Generation iPod Touch and later an iPhone 5, I've been trying to take ever-sharper pictures. We can see all sorts of examples of people taking really amazing photos with their iDevices, and I'd like to join in the fun. Using applications like CortexCam to take really sharp pictures in low-light conditions can help, but the really amazing pictures are those taken in bright daylight. Some of the photos that I've taken in recent months have appeared on this site here, but they are not "direct from the camera". Every picture has been processed in some way using Pixelmator or some other tool to scale, crop, or increase the resolution of the photo. While this works well enough for people viewing the pictures with screen resolutions below 150dpi, people with better screens can spot the fuzziness inherent in my snapshots instantly.

Here is a photo that I took an hour ago while out for a walk with Nozomi. The photo was taken with the standard Camera application on my iPhone 5 with standard settings. Before being posted here, it was cropped and scaled, with the 72dpi photo being set at 200dpi in accordance to the image shrink1. It's alright, but not great. To illustrate the difference, here's the image cropped with the original scale and dots per inch:

Do you see the difference? I do, and I don't have a high-dpi screen.

I'd really like to find a way to take better, more vibrant pictures at a higher resolution with the iPhone. The question is how? I'd like to stay away from putting really high resolution photos on this site for the sake of clarity. The first image in this post is 123KB in size, while the second is nearly three times that size at 653KB. This isn't breaking the bank by any stretch of the imagination, but why transfer more information than necessary?

Topping Up For The Afternoon

Nozomi and I take our sweet time whenever we head out for a walk. She's more than content to sniff every blade of grass to see which other animals have passed by, and I'm more than content to look around and see just how busy the neighbourhood park is at any given point in time. Today we went out for our evening walk a little later than usual and, as a result, managed to see a number of people on their way home after an afternoon outside. We also happened upon this happy little scene … 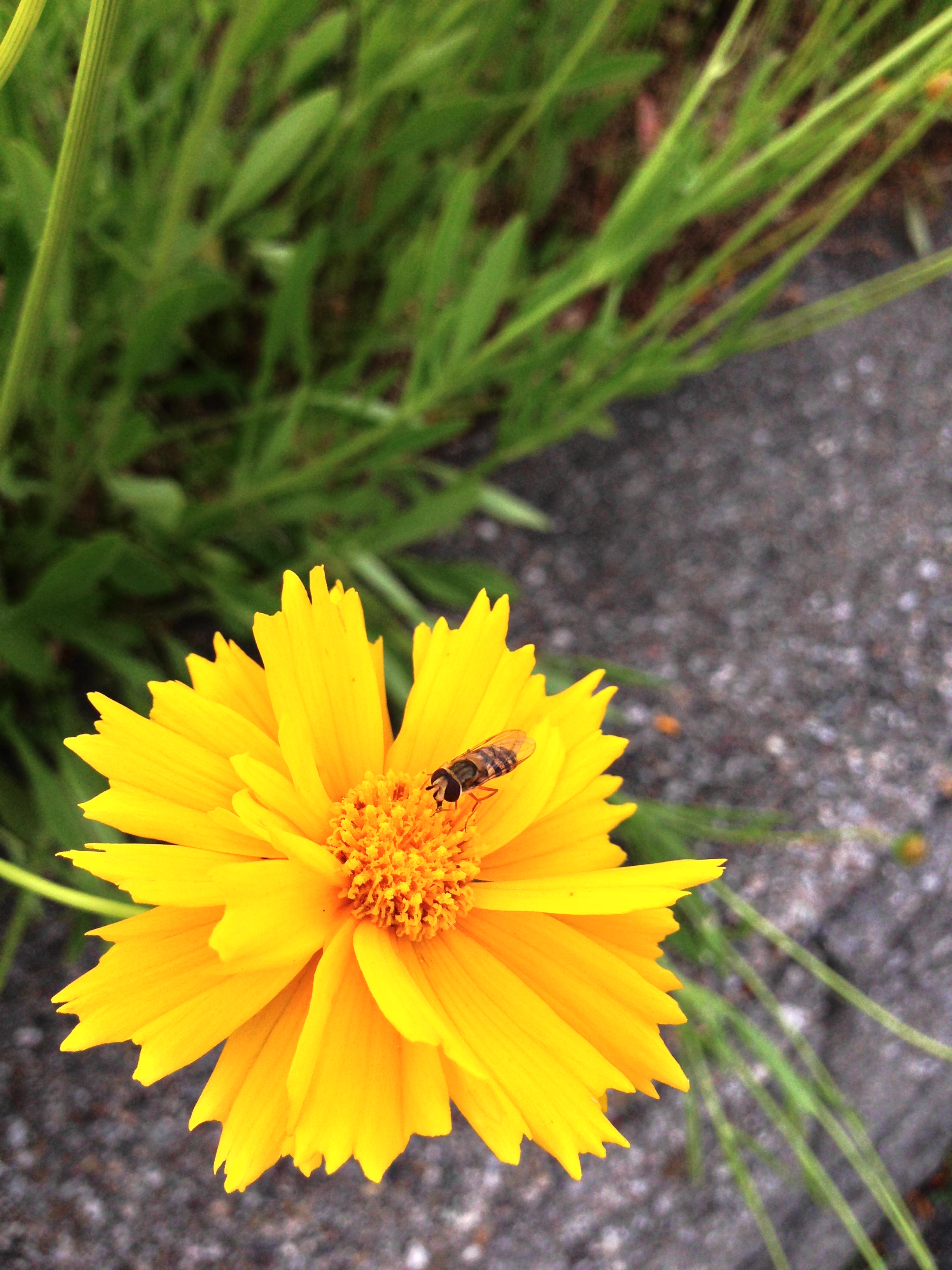 This bee wasn't collecting nectar for the hive; it was topping up for the long flight home.

Sometimes I forget that I live in Japan. While out on a stroll with Nozomi today we took our usual route, heading due south to the creek nearby and crossing three bridges along the way. This one area always reminds me of rural Ontario for it's simplicity and colours. 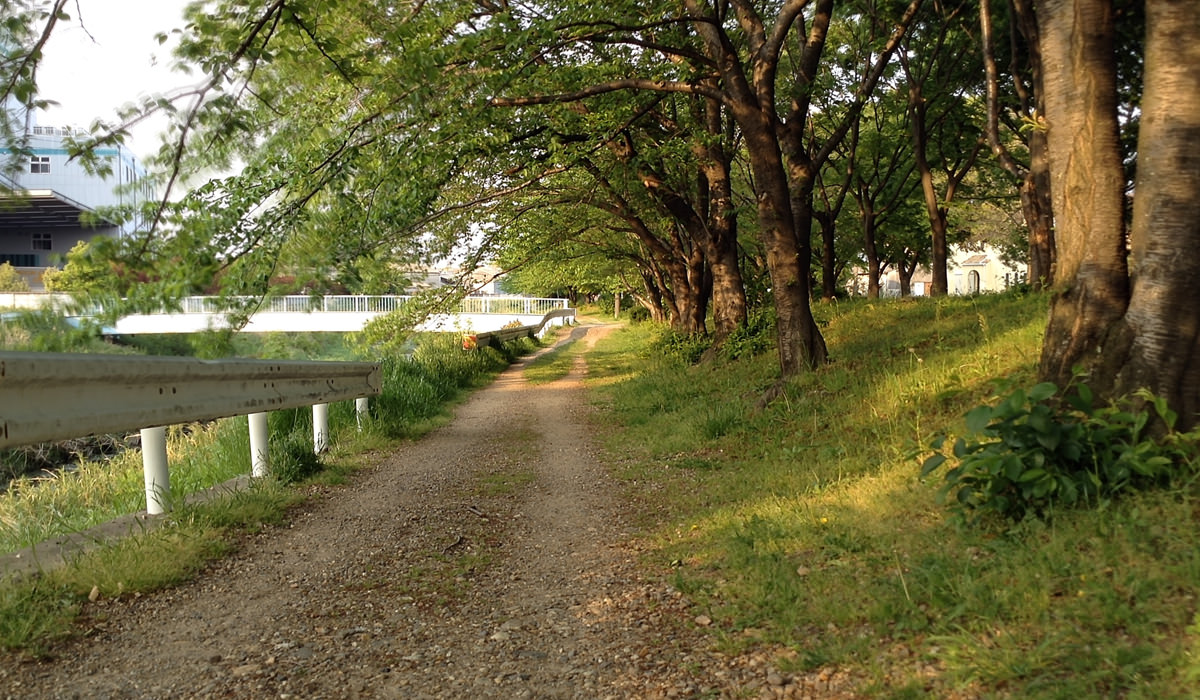 The leaves are a little fuzzy on the left because I've taken to using Cortex Cam lately. The camera application is typically used for low-light conditions, but I really like the sharpness of the image when taking snapshots in all sorts of situations. The only problem I run into is keeping the iDevice perfectly steady while the camera shutter is open. This picture here was taken with the help of a stick that happened to be nearby. The blur is the result of a gentle breeze blowing through the trees at the time of the photo.

Nozomi and I took an extra-long walk this morning and, along the way, we saw something that was completely out of place in the neighbourhood trash collection spot; a little samurai doll that does not look like it was a cheap acquisition. 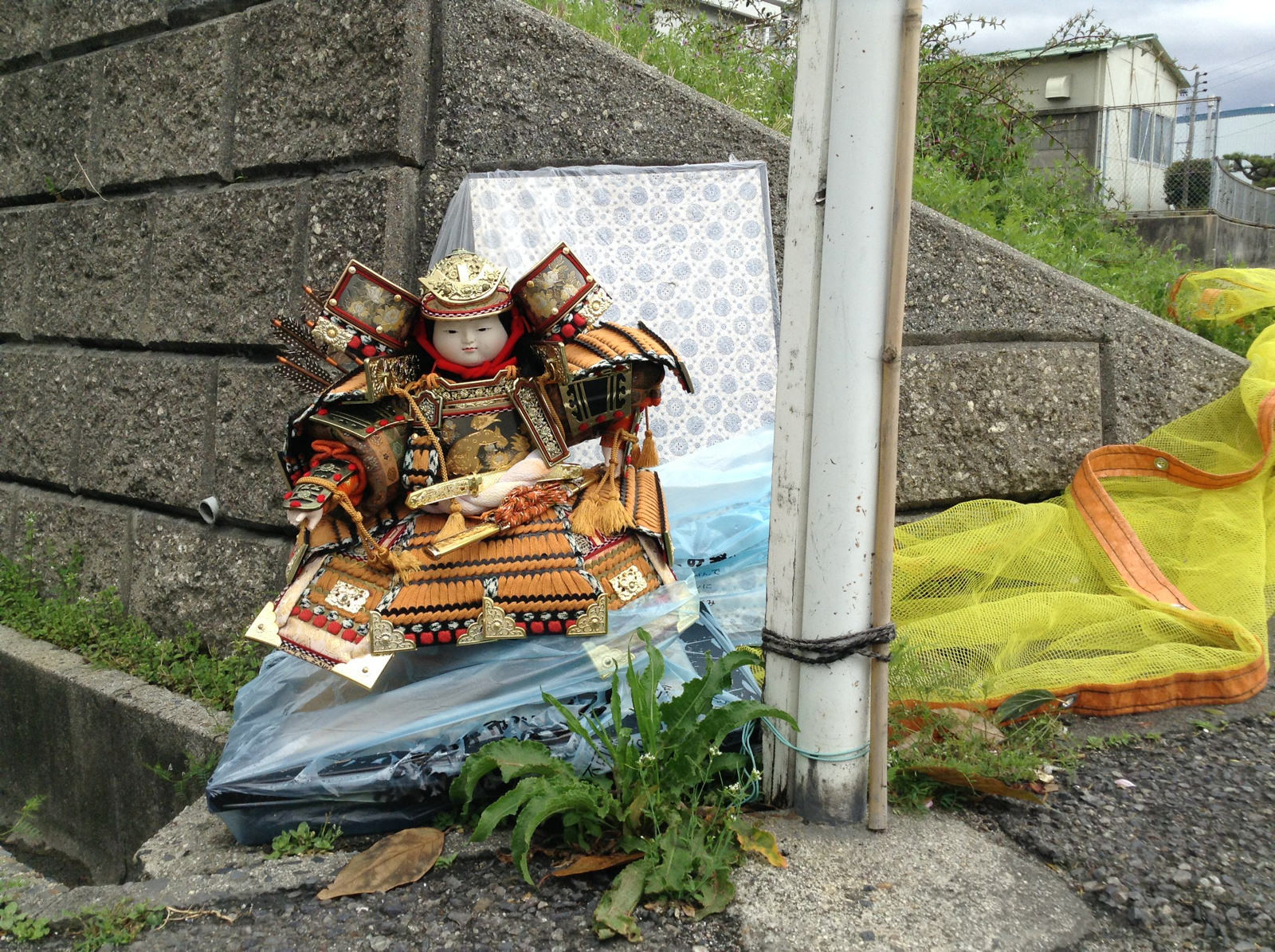 While it's not uncommon to find things with some value in garbage heaps, I am consistently surprised by some of the items that I find tossed away here in Japan. Dolls that cost tens of thousands of Yen. Perfectly good electronics that are just a few years out of date. Hard drives wrapped in anti-static bags. Decades worth of manga in immaculate condition.

It's sometimes enough to make me wonder if there's a career in dumpster diving. There must be a buyer for this stuff somewhere in the world, right?