Monday is perhaps my favourite day of the week. Not only is it a day off, but it's a great way to get things done around town without the hordes of people crowding every square meter of space all around you. What's more, this is the perfect day to take in some of the areas attractions. Today, this meant taking a trip to Little World in Inuyama, Gifu.

Nestled in the mountains surrounding the canine-named mountains, Little World is a place that features "The History of Man", no less than ten gift shops, and some nice exhibitions showing the traditional homes of countries around the world. Although the venue has enough parking to easily accommodate somewhere around 2,000 cars, there were only about 50 in attendance today. The nice thing about this was that Reiko and I could enjoy Little World almost completely to ourselves and at our own pace. 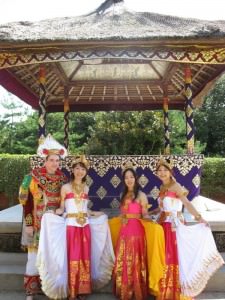 Anyone who enjoys dressing up in the traditional clothing for a particular country should make plans to go on a weekday, preferably when everyone else is either at work or in school. There are signs all over the place saying that anyone that wants to wear a costume (which will cost you anywhere from 300円 to 500円) will need to put them on, take their pictures and return to the rental house within five minutes. That said, this is really only necessary when the place is teeming with visitors. On a regular slow day, you can easily spend ten to fifteen minutes taking pictures and touring the little version of the country while garbed in the appropriate attire for the nation.

The attractions at Little World are mainly aimed at people looking for a diversion. It's great for everyone from 0 to 100 years old, and it will certainly let you see some of the interesting architectural forms from all over the world. Food shops abound, as do the ubiquitous vending machines. It's a shame that the opportunity to learn is stifled by a lack of information (both in English and Japanese), but for someone who's spent more than their fair share of time watching documentaries, they'll already know why some countries designed their homes the way they did.

One interesting thing to note was that some of the buildings that had been made were actually packed up and shipped to Japan some years back. That said, many of the buildings are replicas based on actual places. However, for replicas, these people didn't skimp on the details. Everything right down to the arm hair on the murals has been painstakingly preserved. This is something that you wouldn't expect to see if the places were just re-created based on photographs found online or in an encyclopedia.

Reiko and I had stopped by to get some food at the Italian restaurant just past the German and French towns. I had the penne, while Reiko enjoyed a big plate of spaghetti. The food was quite good, and the tastes reminded me of the "authentic" places I had enjoyed while in Vancouver and other parts of Canada. If Italian food isn't quite what you're looking for, almost every town has its own restaurant featuring some of the traditional foods from that country. The only exception to this was the number of places offering soft-serve ice cream. Somehow, I don't think ice cream is considered traditional fare in South Africa or Peru. Aside from this, the menus were presented well enough that you could enjoy some of the traditional meals from the country.

All in all, the trip was great fun. With less than two dozen other people within sight at any given moment, we felt as though the whole park was ours for the taking. Heck, when we had walked through the Museum of Man, we were the only two in the whole complex!

If you happen to be in the Inuyama are and want to enjoy a nice day with the family, I'd definately recommend Little World. There's plenty of space for children to run around, and there's more than enough things to see and activities to do for adults to enjoy the trip, too.

You can see more title="j2fi.net | Image Gallery | Little World" href="https://matigo.ca/image-gallery/?picasaViewUserId=j.irwin73&picasaViewAlbumId=5243612477219858113" target="_self">pictures from the day in my image gallery.