Try to make one room in your house as beautiful as possible.
– Dr. Jordan B. Peterson

The spaces that we spend the most time in tend to get messy rather quickly. We're usually bringing more things in than we take out and we're generally bad at dedicating time at regular intervals to organise and clean the area. For most people, this is just the way the world works. In my case, I tend to like things to be organised in such a way that I never have to ask "Where is X?", because X has its own spot and only leaves that location when I am actively doing something with X. That said, it would be terribly misleading to say that I didn't also suffer from the accumulation of stuff over time in the spaces where I spend most of my days. The home office is a perfect example of this.

Having the privilege of working from my house means that I could, if so tempted to, wear my pyjamas all day long, eat meals in front of the keyboard, and generally life in front of the computers. So much of what I like to do involves typing on a keyboard, and so much of what I'm paid to do requires the same set of tools. If I were to spend as many as sixteen1 hours a day in the same general space, that location would quickly become a mess. Rings from the coffee cup would form on the desk. Pages from the notepad would be torn out and stacked nearby to be put into recycling the next time I stand. A plate from a meal might be left because an idea captured my attention while eating. In no time at all, the office area would come to look very "lived in".

However, I do not do any of these things. I tend to wear proper clothing when sitting at the desk. Meals are consumed in the dining area next to the kitchen. Papers to be recycled are tossed in the plastic bin almost immediately. And the place where I keep my coffee cup and glass of water is always free from the rings that signify spillage. The home office is where I generally create things, which means that mess cannot be tolerated. Items must be in their proper place. Dust and other dirt must be cleaned at least once a week. By sticking to a routine, my workspace can look like this most of the time: 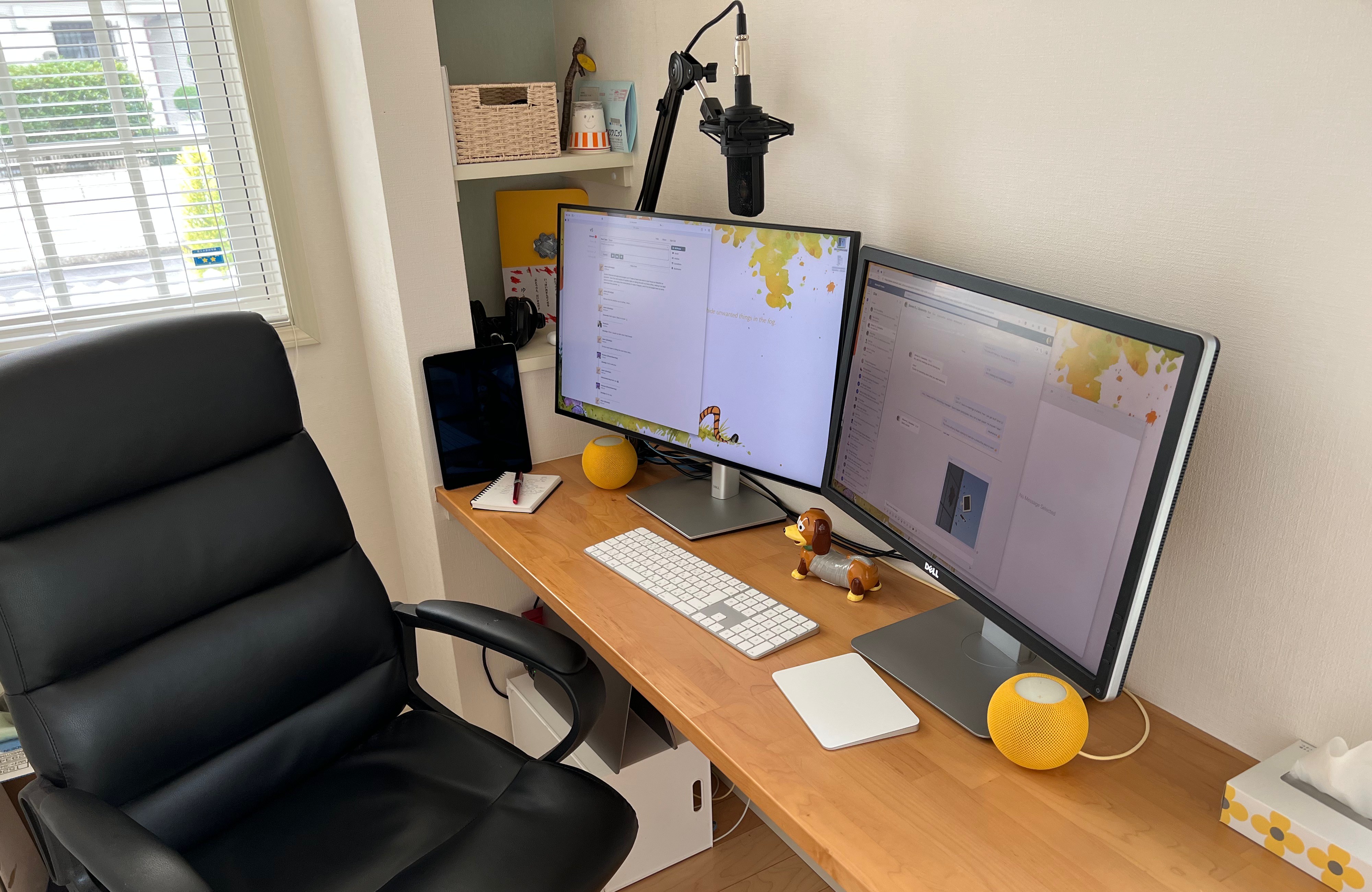 This is how I like to start my working day as it means there is no time wasted looking for hints of ideas that were paused the day before. The paper notepad contains a list of open tasks that must be tended to and the desk itself is ready for whatever I might do next, regardless of whether I need to use the keyboard or touchpad.

The space is functional. Things are laid out efficiently. But is it beautiful?

Two decades ago I would have thought this a gorgeous working space. The lack of disruptive wiring alone makes this a distinct improvement over a lot of the places I've worked over the years. However, the space tires me out after just six or seven hours every day. Just because a space is functional and efficient does not mean it's beautiful. What this place is missing is "life".

Up until a few months ago, this working space had photos and hand-drawn pictures all along the wall. This introduced colour and uniqueness to the space, making it possible to look away from the monitors and instead see a photo of a family member or something they had created with pencils and crayons. This would allow me to remember the story that describes the picture and enjoy the human moment that was captured. I miss the stories.

One of the rules from Jordan Peterson's famous Quora answer told us to make one room as beautiful as possible, and it's a good rule. Beauty inspires us to action. So, with this in mind, some new photos will be put up on the wall over the coming weeks. I'll find some of the better shots of the boy and Nozomi, print them out on some photo paper, then mount them to the wall with some adhesive boarding. A similar thing will be done in other rooms around the house as well. Because while it's true that this place is generally clean and organised, it's also monochromatic. Having some vivid imagery of the family during happier times will go a long way to making the house feel more like a home, even though it's just me here.