A little over two years ago, I wrote a blog post about Gary; a friend of mine. In it I lament the fact that he has coasted through 35 years of living and does not understand the responsibilities that come with being an adult in a committed relationship. The bulk of my concerns were laid out right in the middle of the piece:

While I like the man a lot, he's not exactly a go-getter. He likes to take things easy and allow events to unfold rather than forge his own future. He's worked part time at the day job since the very beginning, and would often rely on his parents to cover various bills. Despite being in a committed relationship with a woman who is very serious about having children, he's unwilling to take on the requisite responsibilities that come with "being a man". He could switch over to a full-time contract at the day job and have a steady income with a five minute conversation, but doesn't want to. He says that the workload would be too exhausting. He's not particularly keen on using any additional skills or knowledge to earn money, as it would take time away from whatever it is he does when not at work. He's not even particularly interested in seeking out a better-paying job — of which there are many — as that would eliminate any seniority he might currently enjoy … which means almost squat at the day job unless you're a full-time or unionised employee. How in the world is he going to afford to support a family? […]

The fact that Gary has never had a full-time job worries me. Can he keep up with a child? Will he hand the young person off to his wife and abstain from his responsibilities? How will he afford the never-ending list of things to buy? Diapers, wet sheets, clothing, toys, books, community activities, school …. The list is almost endless and there is no avoiding them. Heck, what kind of example will he set for his child if he doesn't accept a heavier burden of responsibility? […]

The man is 35 years old. He's not a child, yet continues to shirk responsibility as though he's still in high school. I care about his future just as much as I care about his present, but any conversation where it's suggested he work harder is shut down much faster than it starts. There's no denying that life is undoubtedly more enjoyable when moving at a relaxed pace and the most pressing responsibility is paying this month's cell phone bills, but this is no environment to start a family. I want him, his wife, and any future children to succeed in life. How can I communicate this to him in a way that he'll accept?

What I wrote two years ago about Gary's attitude towards life is just as true today as it was then. However, in the 26 months that have passed Gary has gotten married, seen his hours at the day job dwindle due to COVID, moved in with his wife's parents in an effort to save money and, as of yesterday, become a father to a child that was born far too early.

Looking at the short list of facts, my friend is a 37 year old man who works less than 10 hours a week, has a wife and child who both need a great deal of medical attention1, two cell phones, a car, and a remarkable lack of ambition. I've tried to help him find more steady work, but everything is knocked away.

Gary has lived in Japan for 12 years and still cannot speak the local language worth a darn. Sure, he can do simple things, like buy groceries or get a cell phone, but he won't make the effort to learn enough of the language to work at a school, which is a job he once wanted more than anything else. Being an ALT – an Assistant Language Teacher – at a public school is no walk in the park. People expect you to be present and contribute to the classes. They expect you to lead all listening and speaking activities. They expect you to jump from class to class and never complain about not having time for lunch. However, it's a solid job with a solid contract that pays a guaranteed amount every month … and schools all across the prefecture are practically begging people to come work with them. The barrier to entry is very low. 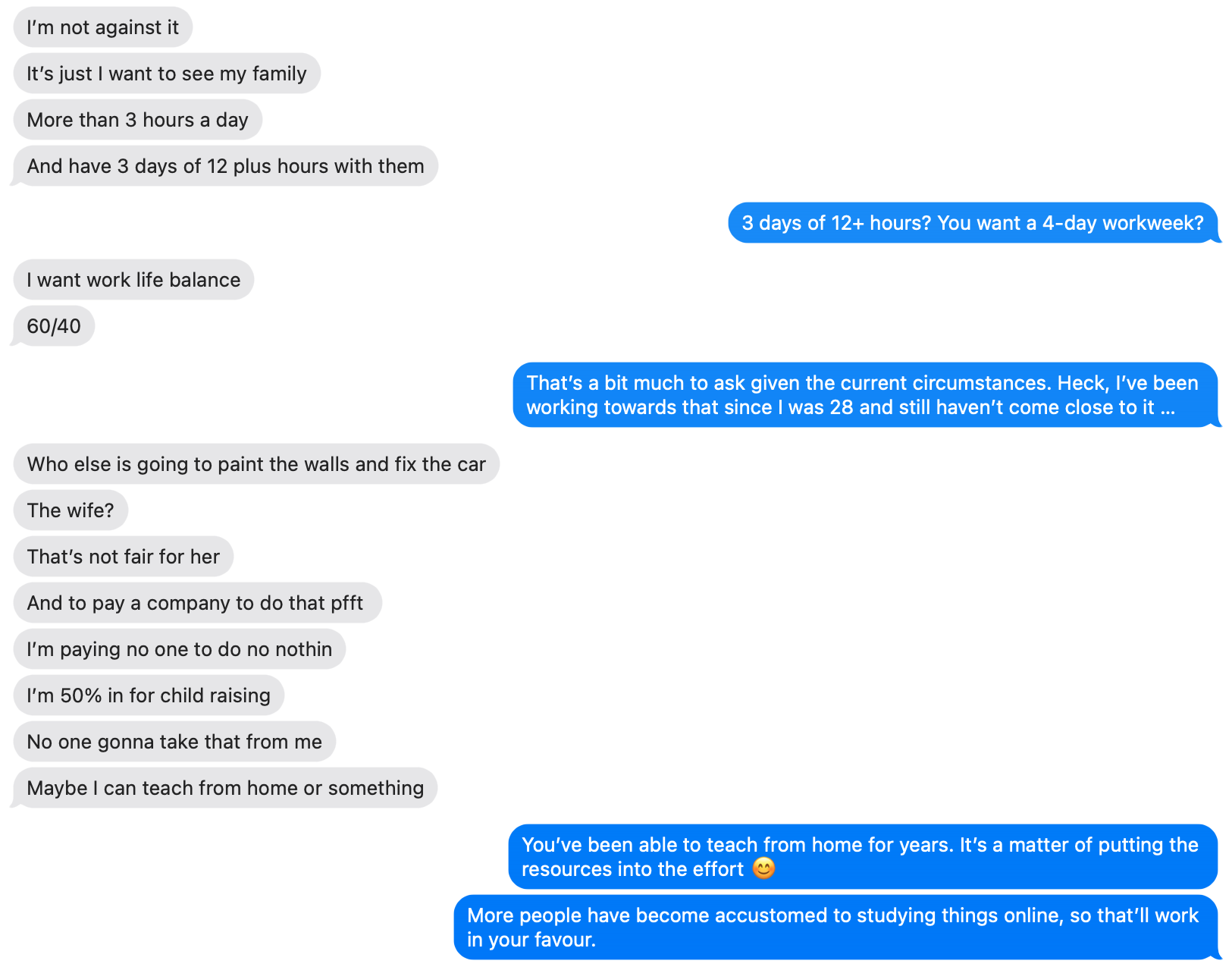 A work-life balance of 60/40? Let's take the "generous" number there of 60% work and figure out how many hours that is per week:

That leaves 112 hours each week that Gary is awake. 60% of that would be 67.2 hours of work and 44.8 hours of family time. In an average week I do about 60 hours for the day job and 20 hours of freelance work Monday to Friday. I don't work on weekends. Gary hasn't worked 67.2 hours in a month for as long as I've known him.

The man has nothing in the bank. The money he earns every month is less than half of what I pay in taxes. He lives with his in-laws because the cheap apartment he had in town previously is too expensive. He needs to buy clothing, diapers, food, a car seat, furniture, linens, and a thousand other things that people try to prepare before a child comes into the world. His older car is expensive to keep on the road. His cell phones, while older models, are not cheap.

While just the other week …

You know … I'll take that back. I can't call Gary a man. Because he isn't. He's still just a boy playing "house" and not understanding just what it is that he is responsible for. A husband and father are responsible for the financial well-being of the family unit in addition to being a proper spouse and role model for children. This doesn't mean that women cannot go out and earn, or that men should earn more but, when a woman gives birth, the last thing someone should ask them is when they'll get back into the workforce because diapers and formula are running out. It's great that Gary wants to be there to raise his child. It's great that he's thinking about a work-life balance to make sure he doesn't miss out on the opportunity to see the world through a new set of eyes as though it's the first time. However, a person who is damn near unemployed does not have the luxury to dictate terms like this. He should be out working multiple jobs to put food on the table and diapers on bums. Yeah, it'll be rough. Yeah, he's 37 and employers are going to have a hard time justifying hiring someone with a resume that has just two jobs in the work history section, both of which state "Part Time". And yeah, he's going to miss some of the moments as his son learns to control his body and interact with the world. Gary's wife will be angry that so much of the child-rearing is being left to her while he's at work, and that's a completely justifiable complaint given that her husband has been employed – part time – for 22 years and doesn't have anything to show for it.

Gary and I have known each other for over two decades. We've talked about a million different things, including the importance of taking on responsibility and putting the needs of family ahead of self. Yet it seems the weightier discussions have gone in one ear and out the other, just as it did when Gary's father tried to instil in him a proper work ethic.

Despite the disappointment and frustration I feel towards the guy, I want him to succeed. I want him to be able to provide his family with more than just the basics of survival. I'd like to see him life in an apartment or house without the need for generous support – and patience – from the in-laws. Heck, I'd like to see him stand up to the challenge of learning Japanese and actually using it.

My Japanese skills are not great, and every day I find a larger gap between what I think I know and what I actually know. My son will be five years old in a couple of months and he comes home with new vocabulary that I need to look up and learn every single day. If I don't do this, it'll be just a couple of years before we can't even communicate with each other. Will Gary do the same for his child? Or will he expect everyone to speak English at home?

So much of this has been laid out to Gary over the last couple of years and particularly now that he's responsible for a vulnerable little human. Unfortunately, any time our conversations turn serious, he gets quiet and puts the phone down. This is true whether we're using text or having a call.

I want him to succeed. I want his family to know they can rely on Gary to do the hard work when times are tough. I want him to learn that it's not okay to be a self-centred, lazy piece of crap when people need him to make sacrifices for the betterment of the family unit.

Unfortunately, I don't think this is something I can help him with anymore.

Good luck, Gary. You're going to need it.