Last week the boy had his very first stage performance at school. As one would expect, this sort of thing gives parents a number of reasons to be less cautious with spending, particularly when that money spent can result in better-quality photos and videos. At the tail end of 2016 we picked up a Canon Kiss x7 DSLR with two lenses with the expectation that we would be taking lots of pictures of a new person as he grew up. This has proven to be a great investment as the image quality from this single-purpose camera is far superior to anything that I've seen from a cell phone1, but taking distance shots in a dim room — let alone an auditorium — has always been disappointing. The EFS 55-250mm macro lens that came with the camera is just not up to the task. So, with the purse strings loosened a bit, Reiko authorised the purchase of a prosumer-grade lens: a Sigma 100-400mm F5-6.3 DG OS HSM.

To test the camera before the boy's performance, I took a number of shots at night after everyone was in bed. A photo of a living room lamp came out crystal clear despite being more than 6 metres away. Words on a thermostat could be zoomed into and read with ease from five metres. In areas of even more shadow, the lens captured enough light to take a relatively-good shot of some toys under a table. Things were looking good, but I wanted to try something interesting to see just how far the camera could get a clear shot.

I wanted a good, clear picture of the moon.

A quick image search online for pictures of the Earth's moon — or moons of other worlds in our solar system — will reveal millions of pictures, many with remarkable image quality, excellent colour balance, and near-perfect framing. These shots are all well and good for desktop backgrounds, but I wanted a photo that I took. Since I was a young boy I've always wanted a telescope. My parents couldn't afford to buy one, given there were five kids who needed food, clothes, and other necessities, and when I started earning money my priorities had changed to investing in computer equipment. However, times have changed. While the Sigma 100-400mm lens is not technically a telescope, it does have some pretty good range.

So off to the park I went, camera in hand, to take some pictures of our nearest celestial neighbour. This is one shot that I managed to grab with everything in automatic mode: 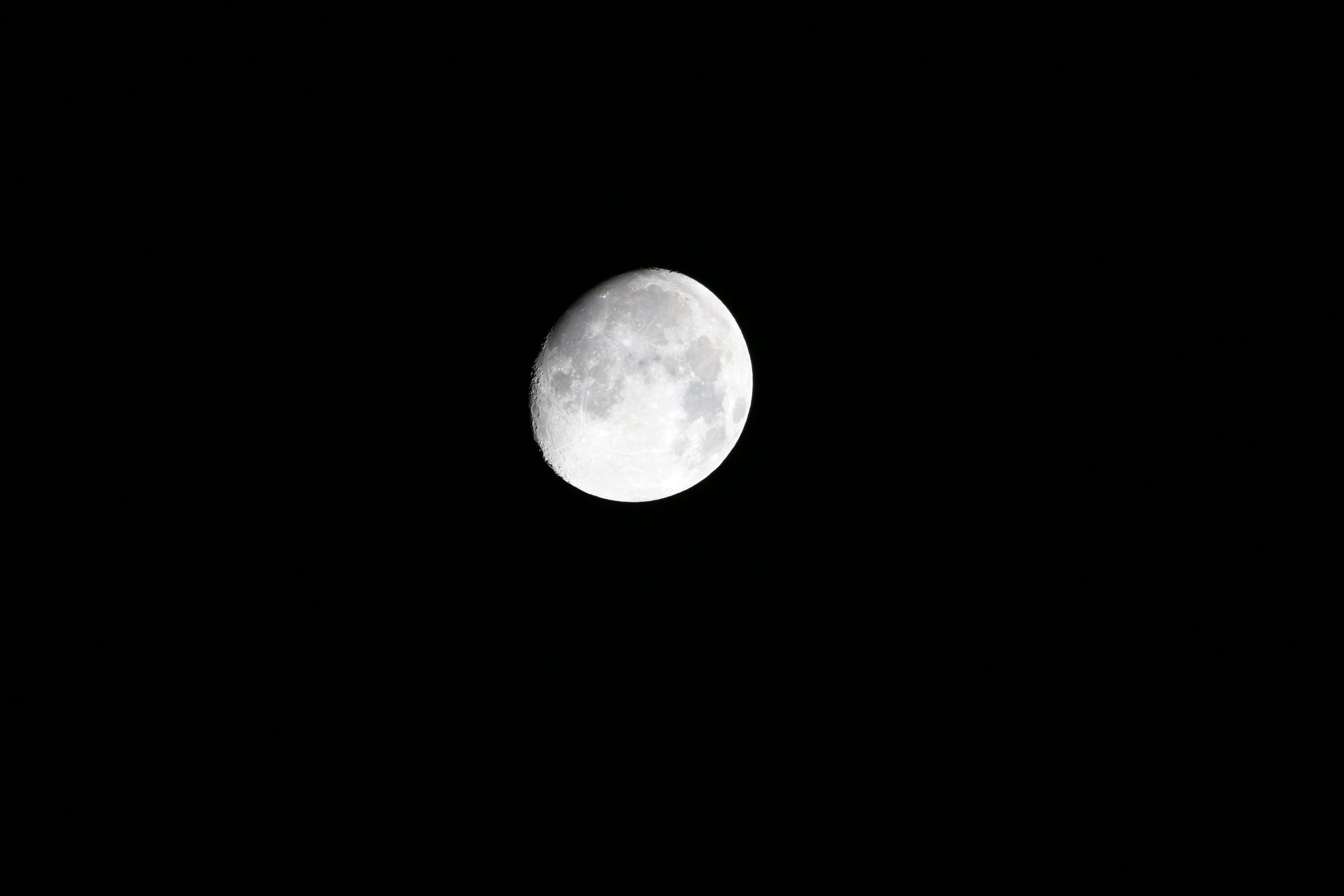 Not a bad photo for an amateur holding a big lens in his hands rather than with a tripod. Not a great one, either. I needed to learn how to take pictures of bright objects at night.

Over the course of a couple days I read a number of photography and astronomy blogs to see how novices and professionals captured images of our moon. Patterns emerged. I quickly discovered that the first photo could never have been great because the ISO level was all wrong, as was the aperture, and the shutter speed. What I needed to do was this:

My earlier attempts with automatic settings had all of these numbers wrong, which resulted in a large number of completely black photos with a solid-bright disc in the middle. The one semi-decent shot from the first night was just sheer luck.

So, armed with a little more knowledge, I went out to the park again tonight to see what sort of pictures could be acquired. This was the result: 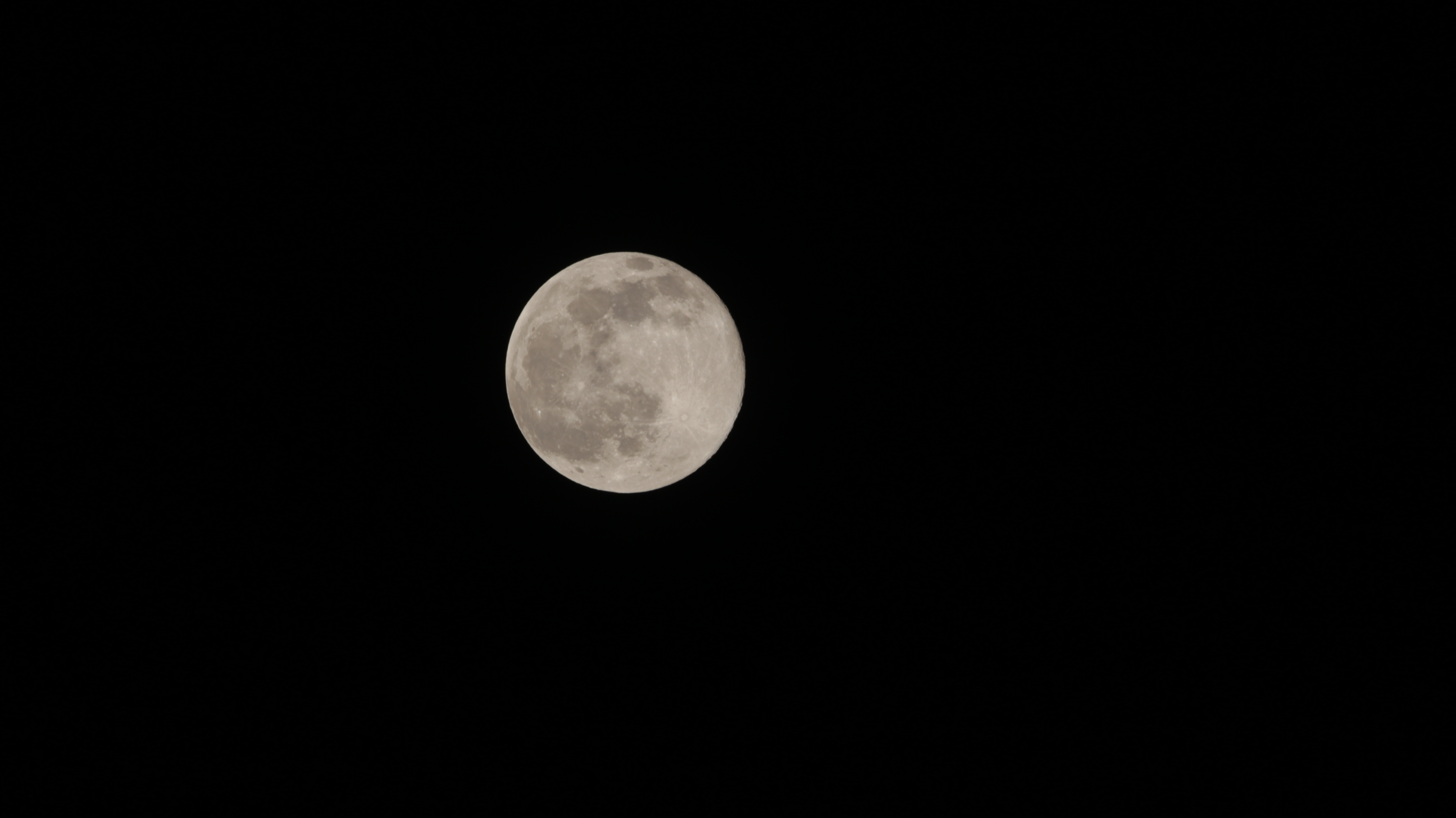 This isn't bad. Nor is it great. There's a lot of pollen and other pollutants in the atmosphere tonight. That said, this is a step in the right direction. Progress. Hopefully, by continuing to hone my skills with the camera and various lenses, I'll be ready to start taking pictures of really distant objects with a proper telescope in a couple of years when the boy starts showing an interest in planets, asteroids, nebulae, and more.