How Reliable Is Feedly?

Shortly after the Ides of March last year1, and for reasons I've never been able to work out, Feedly stopped updating the RSS feed for this site. The XML file that is generated for the site has been consistently deemed valid by the W3C Validator and other 10C-based sites continue to see their syndicated content properly updated in Feedly. I know this because I subscribed to a number of them. Mine, when pulling from the XML version of the syndication feed, will not show updates.

The XML version of the RSS feed will work with a number of clients just fine, as I've tested the site with standalone clients as well as alternative online services, such as FeedWrangler and Fever2. Has Feedly simply stopped visiting the site and, therefore, does not know that the RSS feeds have been operating just fine aside from the one little blip that took place on April 10th?

According to the service logs, this isn't the case.

The Feedly crawler is stopping by this site almost every hour for the XML feed and every three hours for the JSON version, which the service has no trouble at all reading. The XML file is being properly returned, too, as the number of bytes sent is the very same number of bytes as the cached XML file (compressed as a gzip). Those subscriber numbers look a little off, though ….

Seems one or all of the reported numbers are false. 1 subscriber? Just me?3 Or is it 2 subscribers? My mum and I, perhaps? Or is it 19? Perhaps some other number?

Unfortunately, this problem does not seem to be limited just to me. A now-retired UserVoice.com forum had hundreds of people asking the same question for various feeds that just stopped updating one day. The service seems to be aware of the problem, but is unwilling to do anything about it. 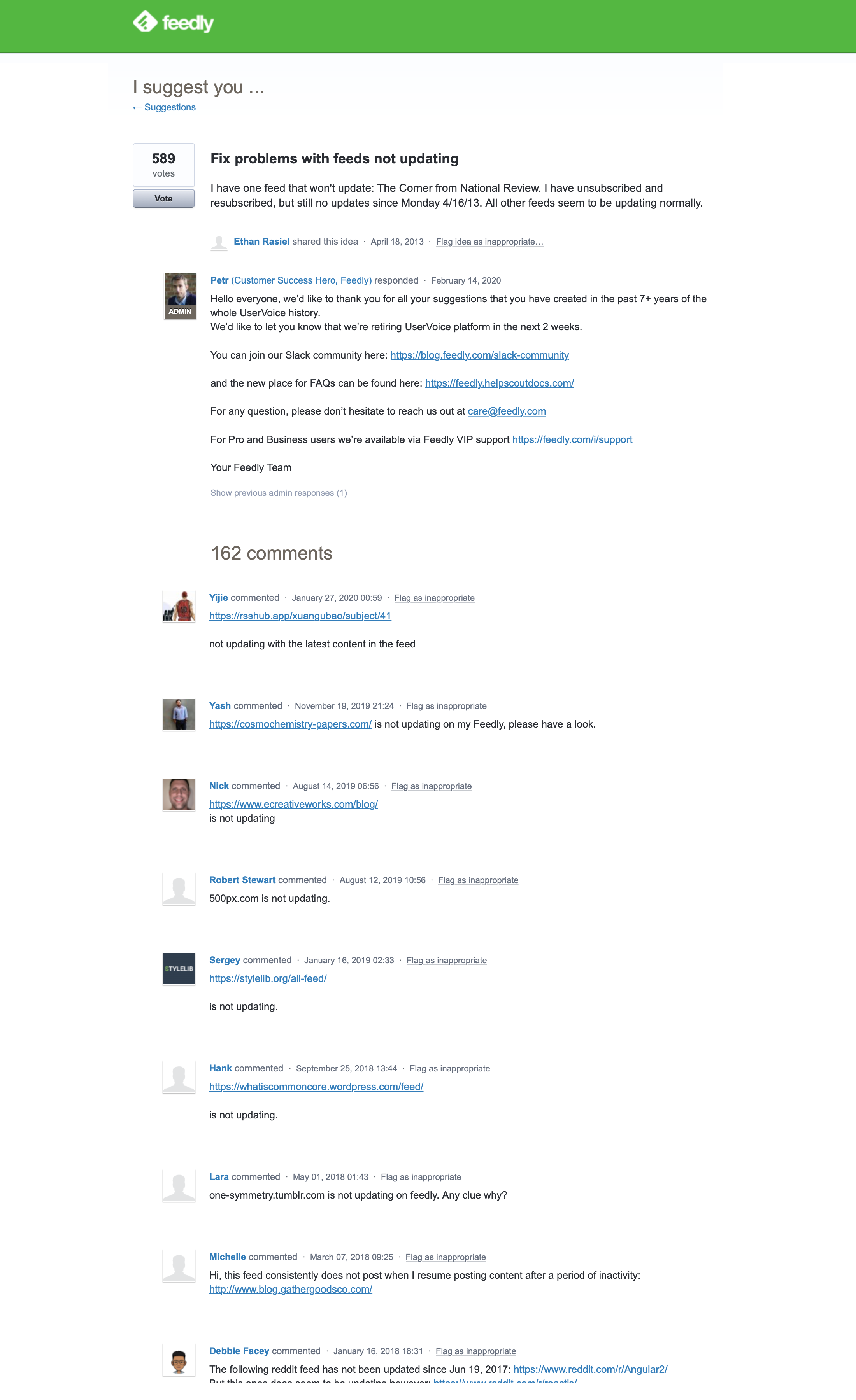 So what is a person to do when their RSS feeds stop updating? Readers who notice will hopefully continue to visit the site directly or change readers. Writers who want to be read, however, will suffer if people using Feedly just thought that the site had gone silent, like tens of millions of blogs have over the years.

Personally, I've lost interest in trying to make things work with the service. My syndication feeds are valid and have been for well over 8 years. Rather than mess around with someone else's service, I'll do the next best thing and make my own RSS service. As one would expect, 10Cv5 already has this functionality built in. All that needs to be done is to build a simple client, write the documentation for the /reader API, and share it with the world.

When paid cloud services drop the ball, I tend to pick it up and take it somewhere else.