For some inexplicable reason, every pair of headphones that I've purchased over the last decade has been from Audio Technica. It started shortly after getting an iPod Touch and finding the white earbuds provided by Apple completely unusable outside of a quiet room. An electronics shop near my employer had some decent earphones for about $20, so I picked up a pair. They sounded really good and, as a result, the next pair I bought a year later were $50 Audio Technica earphones. A year later I splurged for the more expensive CKM500s. A year after that I bought the even more expensive ATH-IM03s and loved every decibel.

A pattern can certainly be seen here. A new pair of earphones were acquired on an annual basis, often 15~18 months after the previous purchase. I generally do not replace equipment just because there's something newer out, and this was certainly the case with these headphones. A new pair was only acquired after the previous pair developed a problem. Interestingly, each pair had the exact same problem: sound would no longer emerge from one of the two phones; generally the left side.

The ATH-IM03s were monitoring earphones, though. I bought these not only because of the glowing reviews online, but because the wire leading to the phones was replaceable. When the eventual wear and tear became too much, rather than toss an expensive piece of equipment, I could just grab a replacement cable for a fraction of the price of a new set and be on my way.

This was the theory, anyway.

The ATH-IM03s were generally used for 4 hours a day while I was on the way to work, on the way home from work, or just out and about between classes. I would listen primarily to podcasts, as music is generally best enjoyed when not riding trains or navigating crowded pedestrian spaces. As someone who wore a suit and taught for a living, I wasn't exactly the most physically demanding person and, when I wasn't using the earphones, they'd be put away in the original case with the cable carefully wrapped in such a way that it didn't tangle … because tangled wires upset Morbo. However, 11 months into ownership, the left side of my audio started to cut out. As these were still under warranty, I brought them back to the shop for some warranty service. Two weeks later, the earphones were returned with a new cable.

All was good with the new cable and I could once again enjoy superior sound isolation while out and about with a phone full of podcasts. Unfortunately, the exact same problem happened again just ten months later. Once again, I went to the electronics shop and asked if it was covered under warranty, but this time it wasn't. The shop did have a replacement cable for $65, though, and I stupidly paid the money because I couldn't justify spending more on a whole new set of earphones when one of the reasons I went with the IM03s was the ability to replace cables. There were cheaper replacements available online, but the reviews were mostly negative as these were poor Chinese knock-offs.

The new cable went fourteen months before the left side cut out.

In March of 2018 I had to fly to the other side of the globe for a week of meetings at the corporate headquarters. Flying without a good pair of earphones was not an option, so I went in search of another replacement cable for the IM03s. I found one online for about $150, which is an absurd price, but none of the original cables from Audio Technica. It was almost as if the cables were no longer available. I went to a couple of audio electronics shops in town, but none carried a replacement cable for the IM-series buds. A little bit of digging online revealed that the cables really were no longer available from the manufacturer. Only 3rd-party companies would offer something compatible … for a price. 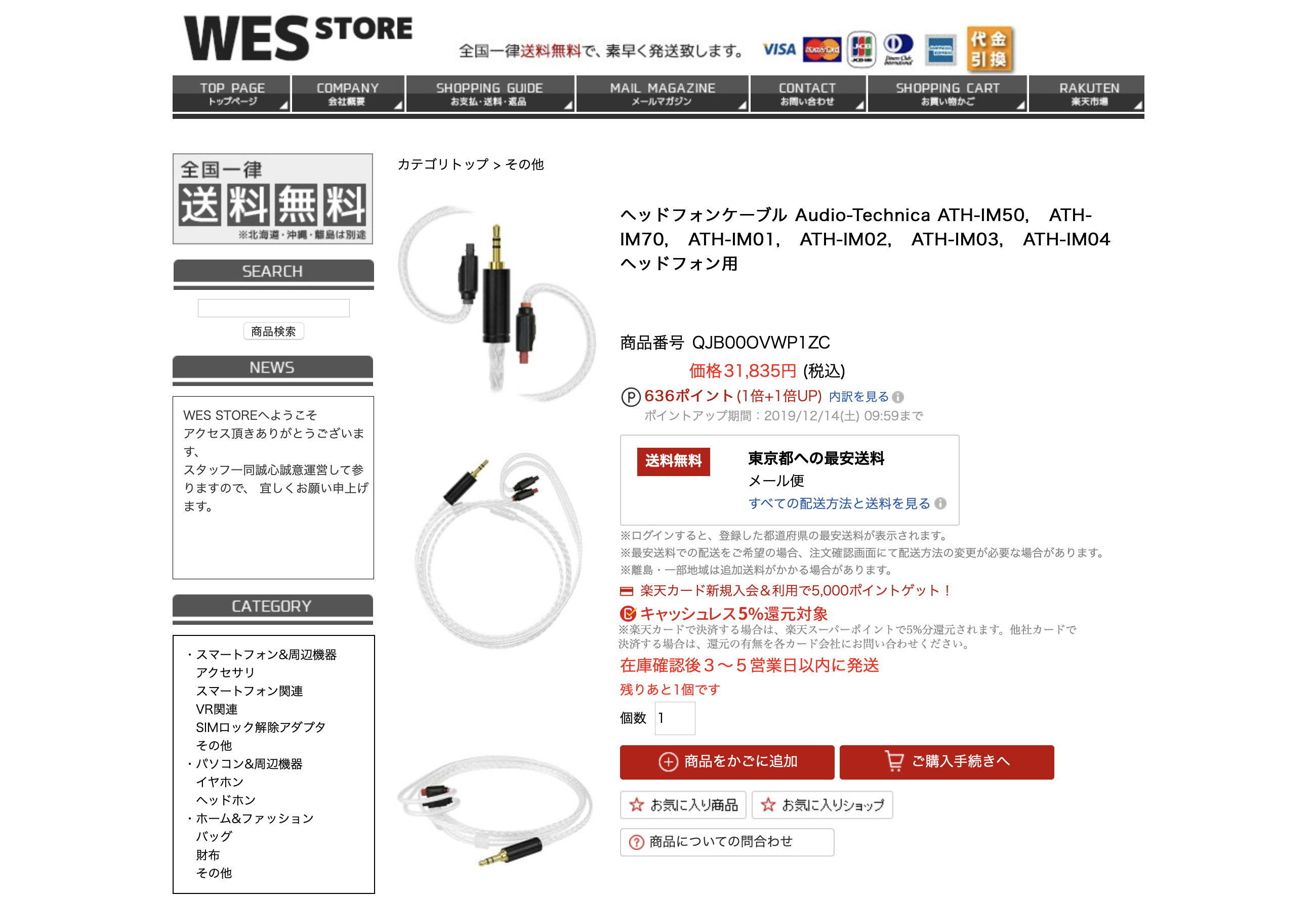 The image above shows the current price of a third-party cable like I had found two years ago1. 31,835円 works out to $291.29 USD with today's exchange rate. Tack on another 10% for sales tax and it's well over $320 American dollars for a cable that makes the earbuds useable while simultaneously looking as cheap as a dollar store neck strap.

I wasn't going to pay this price. Instead, I opted to get a pair of Bluetooth earphones. I did the research, read the reviews, and settled on -- yet again -- something from Audio Technica. Sony, Philips, and Bose certainly had options, but none had the same sort of positive feedback as the ATH-CKS5500BT. Throwing caution to the wind, I picked these up a couple of days before my trip to the US and gave them a shot.

My initial impressions were mixed. The battery life was horrible, as I couldn't get more than two hours from a charge. To make matters worse, the sound quality was about the same as a phone call. Sure, there are bandwidth limitations when using Bluetooth, but this was a pretty serious downgrade from what I had once enjoyed with a wired set. Things only got worse when I went to Tokyo, as it seems there is simply far too much interference at train stations in Japan's capital, rendering the device little more than an expensive neck accessory. Over time the battery life did improve, but the other issues persist to this day.

Except … there's a new problem with the Bluetooth earphones: the left side no longer works.

I noticed the problem this past weekend while out in the park where I was listening to podcasts. The right side was much clearer than the left. I had thought it might have been just the way the audio was recorded, but no. Everything was balanced more to the right. Today the left side never came on at all, meaning every podcast was all right all the time. A first world problem for sure, and the last straw. I use these headphones only when outside for a walk around the neighbourhood, or the occasional trip to Tokyo. I work from home, which means the device gets used for no more than four or five hours a week.

Not two years have passed since I bought these things.

So enough is enough. No more Audio Technica for me. I should have learned my lesson when I couldn't easily replace a cable. I should have just stuck to the cheaper pairs that are pretty much a dime a dozen. I should have spotted the pattern sooner.

For the time being, as I'm not going very far anymore, Apple's EarPods will have to suffice when I leave the house.