At some point in the last few years it seems that I put on a pair of rose-coloured glasses and, as one would expect, it has coloured my perception of the digital tools people used 20-odd years ago. This isn't true for every piece of technology, though, as I was not particularly enamoured with the Pentium II/266 that I used for a while nor the finicky graphics drivers for the Voodoo card. CRT monitors weren't all that great to stare at for more than a couple of hours, and bandwidth at the turn of the century hovered around 300kbps on a good day if you lived next to the phone company and had a $100/mo. ADSL connection1. "Fast" hard drives rarely moved data faster than a couple dozen megabytes per second. WiFi was awful if anyone around you was using a cordless phone. Perhaps worst of all was the reliability and pervasiveness of Windows Me, an operating environment so bad that only grandparents and public schools dared to use it.

When I think about all the devices I've owned over the years and what they meant to me, there are a few that stand out. There's the first Mac I owned, which allowed me to learn a better way to design UIs and write software. Before this there was the SoundBlaster AWE64 that saw heavy usage until 2007 and allowed me to easily connect musical instruments to the computer to compose music. Back in 2001 I built a dual-processor PIII/1.0GHz workstation with 512MB RAM that allowed me to really explore software development and, more importantly, the power of relational databases.

But when I think about the device that had the biggest impact on me — before switching away from Windows2 — the machine that instantly springs to mind is the Palm PDA. 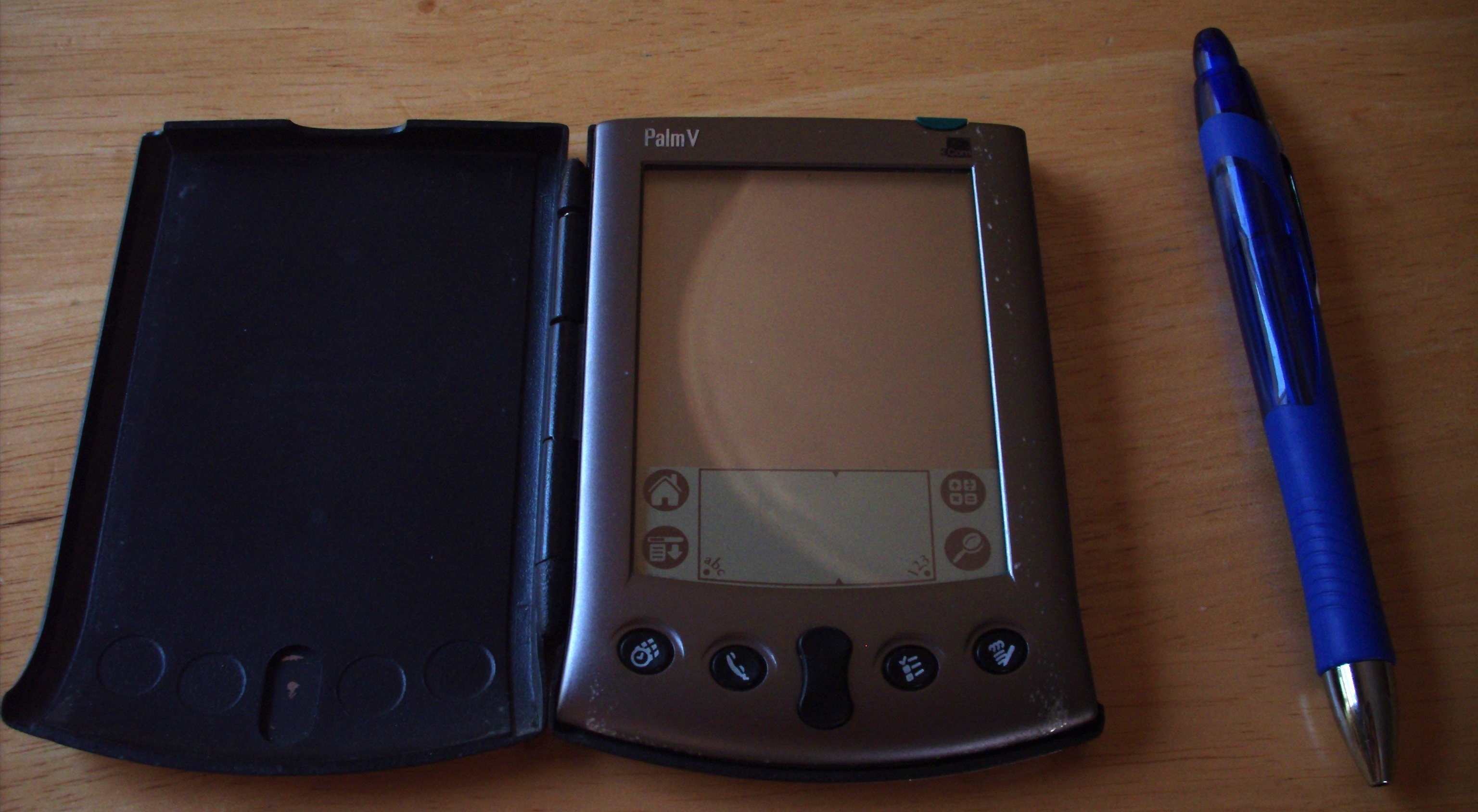 Between 1999 and 2006, I owned twelve PalmOS-powered handhelds, only one of which was made by Sony. Every six to eight months the screen would be scratched up beyond repair, and I'd head to the nearby computer shop to pick up a new model. In 1999 it was the Palm IIIe that allowed me to streamline processes at the day job. The next model up, the IIIxe, made it possible to use applications with simple video graphics. It was around this time that I started reading books on the Palm, eliminating the need to carry paper novels with me everywhere. The Palm V, pictured above, was an incredibly capable device that earned me a better job.

In 2003, a few months after moving to the Vancouver area, I was working in the warehouse of a printing company. I ran the afternoon shift, ensuring warehouse hands had enough work, keeping the printing and binding machines properly stocked, and removing waste products as soon as the bins were about 80% full. Within a matter of weeks I had worked out the patterns for all the machines and the crews so that I could keep everything operating with almost zero machine downtime as a result of my lack of preparedness. Because I knew the pattern, I could write a piece of software for my Palm V to help run the warehouse. People saw me come to work 15 minutes early, walk around the floor while taking notes on a little PDA3, then hop on the forklift to get things organized for the start of the shift. Eventually management learned about the tool and asked for a demo. A few weeks later I was moved to a different department, given a raise, and put to work solving more complicated problems for the company.

Writing software for the Palm handhelds was not at all easy. The tools at the time were sluggish, cumbersome, and one little error could take a whole weekend to track down. Still, it was the software and tools that I wrote for the Palm that opened interesting doors, such as the submarine project in 2004 that used a Palm Tungsten T.

The tools we use today are far more powerful and capable than anything a decade ago, let alone 2004, but it's always the Palm that I remember fondly. If I had to use one today then there would undoubtedly be a string of complaints on this site, from the lack of support for modern encryption algorithms to the lack of a decent WiFi radio. However, if I had to use one today, the first couple of days with it would have me feeling incredibly nostalgic for a time when it seemed that anything was possible … so long as you didn't mind waiting a bit.