About two months ago I installed Evernote on the computer and picked up a trio of the branded Moleskine® notebooks designed to be used with the service. The goal was simply to remove some of the friction that I've felt with note-taking applications since giving Evernote up a few years back. No other tool does as well a job with optical character recognition in multiple languages of the images uploaded, and no other tool organizes the data in a manner as logical as Evernote without a whole bunch of backflips an heavy lifting up front. So, rather than continue to struggle with pathetic digital notes, as many as 12 active paper notebooks, plus one or two A5-sized notepads, it just made sense to blend the paper and digital together with something that I know works1.

However, despite having some pretty decent success with Evernote these last few weeks, it's clear that paper is still very much the primary way I take notes, make plans, and prioritize tasks. No other system has come remotely close to reducing my use of trees and ink.

Today, while I was scanning the day's notes into Evernote, I asked myself once again why I was doing this. Why write on paper only to scan into a computer and store digitally, especially when it's just text? The image above was a quick bit of prep for a demo I gave earlier today. Does it really need to be digitized and archived? Did it need to be written on paper at all? My usage of dashes, dots, triangles, and checkboxes when formatting notes can very easily be moved over to a digital medium, as I've done it before through the use of keyboard shortcuts. Square and curly brackets that span multiple lines are less-than-easy to reproduce, but this can be worked around with some creative layouts. I like to use as many as three colours when taking notes, depending on the objective, which is easier when using Evernote or similar tools as there are more than three colours to choose from and errors can be fixed within seconds. So why the heck do I find it so hard to be a 100% digital note-taker?

This wasn't so much a problem 20 years ago. 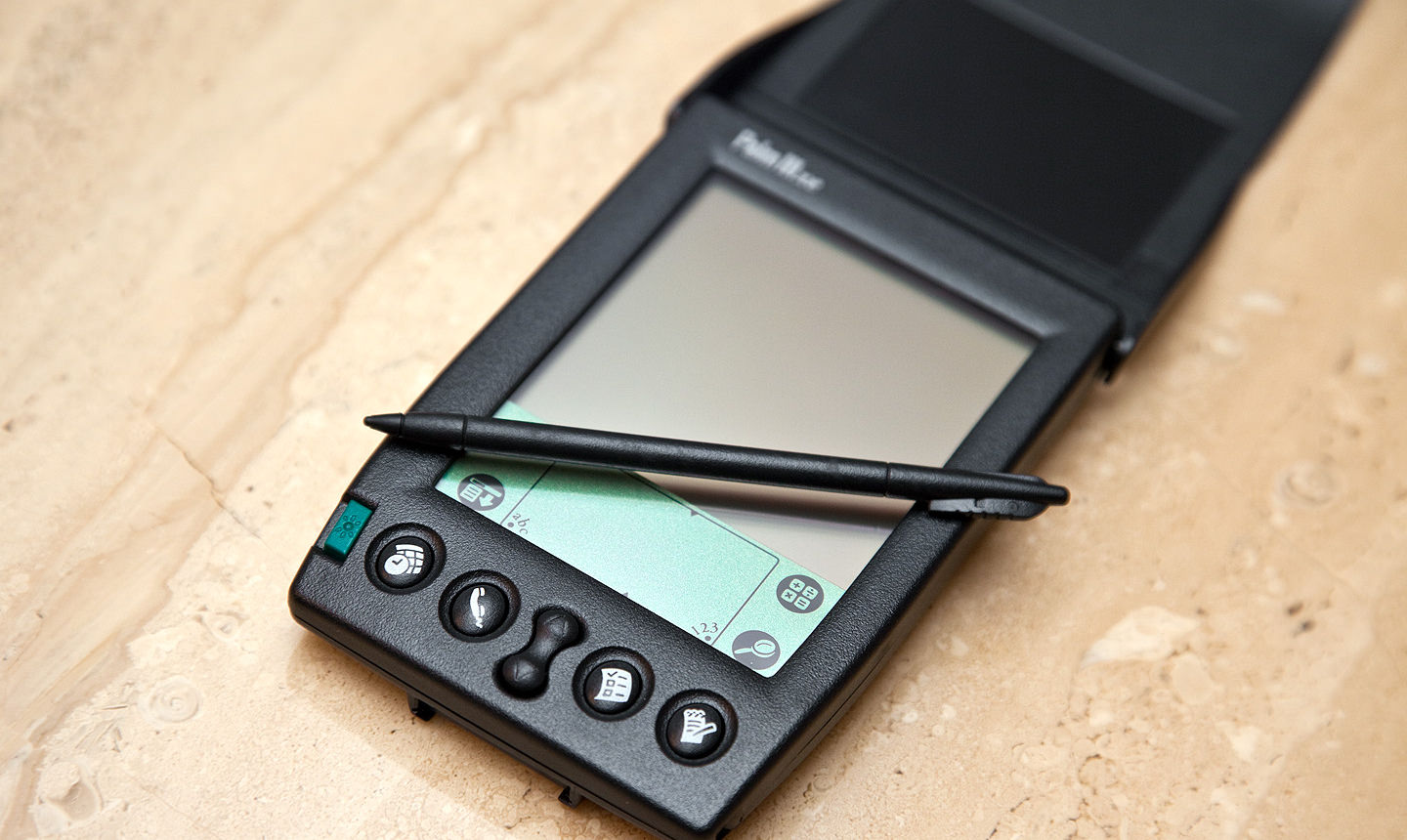 The second Palm PDA I owned was a Palm IIIxe like the one in the image above. It was an amazing little unit that could go days on a pair of AAA-sized batteries. Once a person learned how to use the Graffiti writing system, they could write just about anything in less time than it took to use pen and paper2. I loved this so much that I wrote some software for use at work, where I would need to answer calls, look up information for customers, get back to them, and so on. I had an entire mini-database of customer data in the device that could be looked up in a split second and added to with the stroke of a stylus. My boss at the time picked up a Palm as well so that we could keep our notes in sync, which made the tool even more useful. No longer did we need to run around with a paper book and scribble notes in an illegible fashion.

Clearly I'm not allergic to digital notes, given that the Palm made them so easy and, dare I say it, enjoyable to work with. But I've yet to replicate the experience I had on the Palm with any technology. The closest I get is with the traditional pen and paper, which has the added bonus of being able to handle sketches and doodles. The Palm was never good as an artistic device.

There may be a stylus in the form of an Pencil arriving in the mail at some point in the future. If this does arrive, would I feel the same enjoyment when writing notes on an iPad as I did on the Palm? Would seeing my handwriting be converted into an easy-to-read font, ready for immediate indexing and searching, encourage me to give up paper? I really don't know. What I do know, however, is that having a dozen active notebooks and a pair of notepads within arms reach at all times makes for a rather cluttered working space.