A couple days ago Randolph had some drama on Twitter after writing a few words on seeing the difference between 4K and 1080p, which brought to mind the discussions I've had with people who are genuinely happy using a 15.6" display running at 1366x768 pixels; a screen resolution that gives me eyestrain within minutes. While WXGA1 does not work for me, it clearly gives millions of people just what they need. Ever the walking edge case, what I need is smooth characters on properly-lit screens. My 13" notebook's primary display runs at 1680x1050 while the 24" 4K Dell P2415Q next to it runs at 2304x1296. Would I want to run these screens at their native resolutions if I could?

No, of course not. That would be silly. 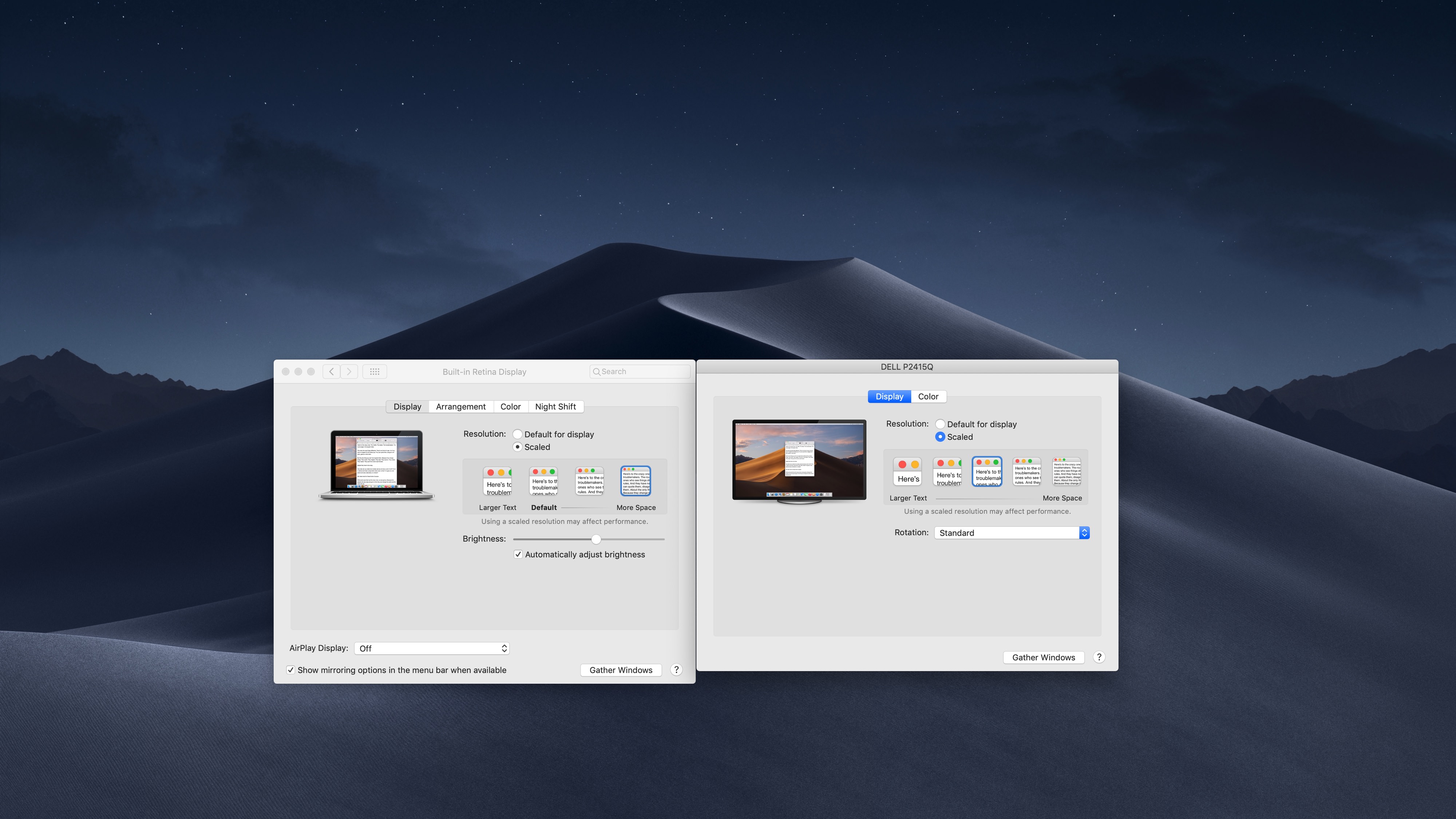 Like Randolph said in their post, this topic started with a (now deleted) Tweet thread from SwiftOnSecurity that suggested that notebooks with hi-DPI screens be set to run at 1080p by default to improve performance and conserve battery power. This is a perfectly logical statement given that a lot of people today are clearly still happy with 1366x768. Going up to 1920x1080 with the next notebook — if there will even be another notebook purchase2 — would already be a nice improvement. Proper scaling would ensure that characters are smooth and pleasing to the eye while also saving on power and heat … which is one of the reasons I am not running my displays at higher resolutions.

When I first started using the 4K Dell, I wanted to run it as close to its native resolution as I could. Sure, the text was small, but the screen real estate was great when working with long SQL queries or web designs while the screen was turned to portrait mode. Even at 3008x1692, the highest resolution macOS supports on the Dell, the letters were smooth and easy to read. There was just one problem: heat.

Because the machine had to work much harder to push 6,853,536 pixels3 dozens of times a second, the fan would run constantly and the processor was 18˚C warmer when idle, which is the same amount of temperature rise seen when I'm compiling complex applications or using an Excel file that contains Asian characters. Was the extra screen real estate worth the noise and narrower thermal envelope? Would the faster battery drain be worth the price of pushing those pixels? Not in the least, hence the 2K scaling.

I agree that for most people, 1080p would be an excellent screen resolution to start with. People who want more or less working space can change the display to something they're more comfortable with. If someone can't see the difference between a 4K or 1080p resolution unless staring at text, that's great. If someone can, that's great too. Computers allow us to configure preferences for a reason.