Our imaginations are wonderful places to escape from the rules and structures that define reality. Some children are incredibly fortunate to have both a vivid imagination and the time required to adequately explore their creativity. I was one such child, often building models of various vessels out of paper and embarking upon "missions" that would often consume an entire afternoon. One of my favourite pastimes around the age of 10 or 11 was constructing boats that were modelled on the large military and civilian ships that I could find in the family encyclopedia set. My models would rarely exceed 15cm in length, but what they lacked in tonnage they more than made up for in complexity.

The first boats were quite simple. A sheet of paper would be folded in half with the ends glued shut. After the seal had taken hold, I would "open" the centre like a hotdog bun, attach a deck, and then cut the ends to be tapered nicely at a 45˚ angle. Once all of the glue had dried, I would bring the model to the nearby creek and release the ship into the water with the goal of following the craft as far as I was allowed to travel1. Unfortunately, the early ships would all tip over immediately after being put in the water. I had yet to learn about ballasts and keels.

As time went on and my knowledge of water craft improved, the models became ever more complex. Ships would have water-tight compartments where air could be trapped to keep the vessel afloat even if some glue had come unstuck. The best ballast was often the artificial gravel used with HO scale model railroads, so I would use that either at the bottom of the hull or — better still — within the keel after wrapping the plastic stone in cellophane. In order to keep the ship floating near the centre of the creek's winding route, a rudder had to be set at an angle between 8˚ and 12˚ turning starboard, otherwise it would wind up hitting the stones along the shore with every bend and curve. Masts were impossible to use without the vessel tipping over, so sails were out. Every ship had to rely only on the flow of the water to complete its mission. Of the dozens — or hundreds — of attempts, only two managed to travel the kilometre or so from the launching point to the King Street tunnel without hitting the shore or otherwise coming apart at the seams as glue bonds deteriorated.

It was fascinating work. The encyclopedias at home explained the basics of buoyancy and how ships generally worked, but the increasingly complex designs came about as a result of the extra study that was put into the effort. In my imagination, these weren't just paper models of cargo vessels, aircraft carriers, or passenger ships. These were water-borne craft that I captained, with a crew of people who were just as intently focussed on the objective. We had to make it to the King Street tunnel, where the creek would enter into a gated tube 3 meters in diameter2. We had to.

In order to build a ship that could make the journey I read every book on boats that I could find. The elementary school I attended and the nearby library had some magazines and books that showed a number of interesting designs, including some twin-hull concepts that would have made a sail tenable while also eliminating the need for a double-reinforced, complex keel to keep the ship upright. But these books were mostly about pictures rather than substance. The real breakthrough came when I went to the Hamilton Central Library on a school trip and looked up the technical books on ship design.

My adolescent mind was blown.

There were blueprints, complex equations, cross-section drawings, and pictures of yachts. I learned that a boat designed for fresh water would work differently in salt water. I saw manoeuvrability diagrams that showed very precisely how much area was needed for a ship of a certain size to turn or come to a complete stop. I discovered just how primitive and utterly simplistic my models were … and stepped up to the challenge.

For my most ambitious vessel, I would take everything I learned from experience as well as the ideas and concepts I thought I understood from the professional books at the Central Library to construct a ship that would travel from the "launching pier" near my school to the King Street tunnel and right on through the other side without coming undone or getting stuck on the shallow shore along the way. More than this, the ship would carry a cargo of one Loonie, which I could only use if the mission was successful. 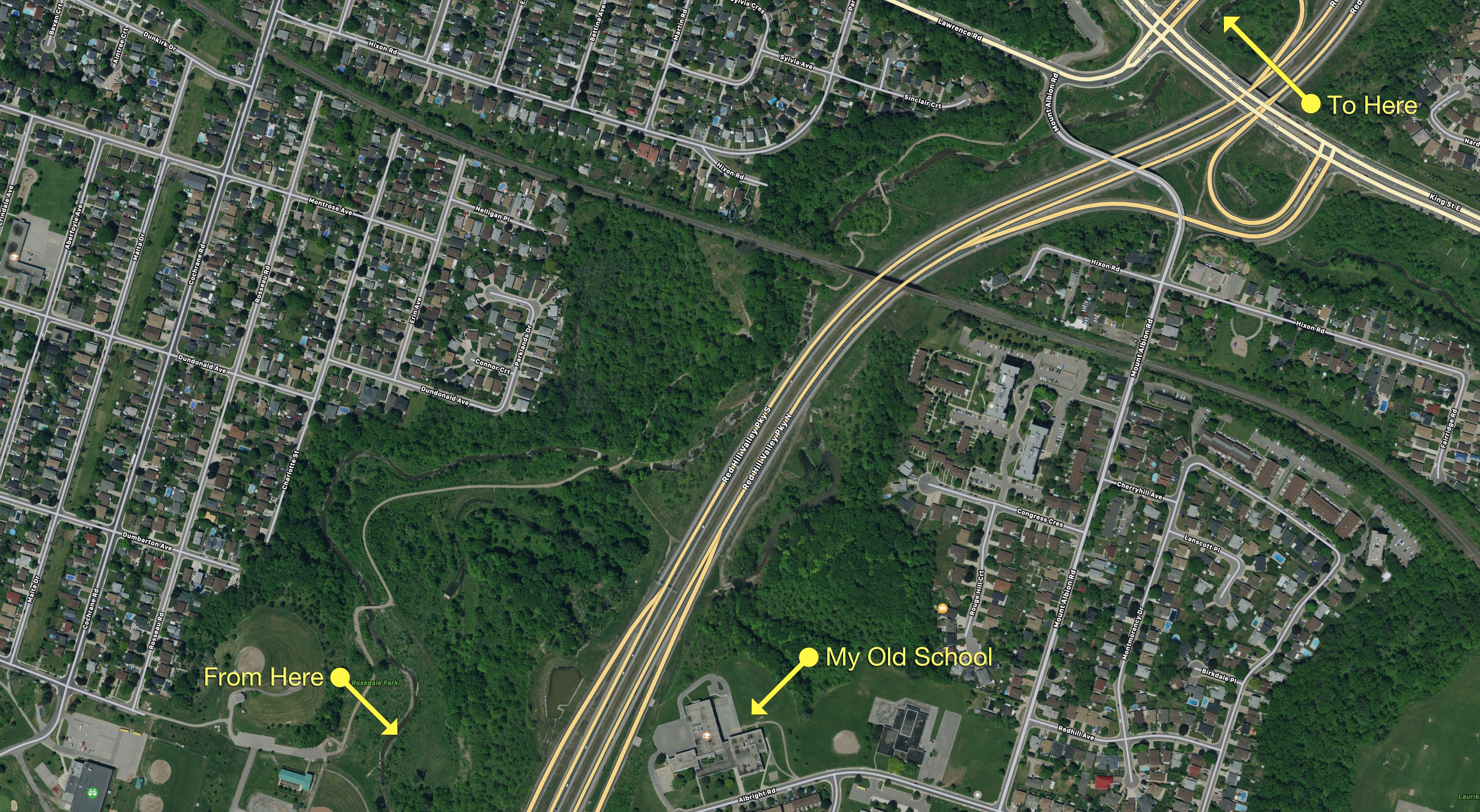 For what seemed like weeks I toiled away on the ship. The hull was the simple part, as I'd become rather proficient having the paper bend and hold the best shape for the water. The keel was complicated, though. I don't remember how many times I rebuilt that part of the vessel, trying so hard to have the built-in tail rudder hold a proper starboard angle after the glue set. The decks were easy, and I even went so far as to have the Orlop deck made from a handful of carefully-shaved popsicle sticks. This sat on top of the in-hull ballast and would be where the single Canadian coin would be stowed. When everything was said and done, the ship was easily the most complex and most difficult thing I had ever built. My father was impressed with the attention to detail and asked if I was really going to have it sail down the Redhill Creek towards Lake Ontario, where I might never see it again.

So I thought about it.

And I thought about it.

And I thought about it some more.

While the ship never once met physical water, it regularly played an important role in the imaginary excursions I would enjoy from the comfort of my bedroom3.