This week I decided to bump up the allergy medicine dosage to 1.5x of what is recommended in an effort to stave off this season’s excessive assault on my sinuses. With each pill weighing in at 88 Yen a piece and the recommended dosage being two pills every 12 hours, I’m now paying just over five dollars a day to have relatively decent vision and breathing, with a slightly less-runny nose. This could be much worse, of course, but $140 a month for a partial respite of a non-fatal condition irks me. That money could be going to something far more worthwhile, such as a new hard drive for the NAS. Hopefully there will be a “cure” for seasonal allergies at some point in the near future. Knowing how the world works, though, this cure would probably cost the equivalent of 50 years of medication and come with a possible risk of contracting a permanent bout of Montezuma's revenge.

All this aside, let’s get on with the list. In no particular order, this week I’ve been thinking about …

Over the last couple of months I’ve been using a Frixion ballpoint pen when writing notes and thinking through data diagrams. While having the ability to erase ink from a page is nice, the feel of the writing tool is sub-par. If I wanted to write with a toy, I’d get one of my son’s colouring crayons. What I would really like is to find a stationery store around here that sells the Mitsubishi PiN felt-tipped pens or, barring that, the Mitsubishi UB-150 ballpoint pens that I used while working in the classroom.

A bad pen is like having a bad sword, in that you spend more energy battling the failings of the tool than accomplishing your goals.

Everything Old Is New Again

While watching the news a commercial came on to promote some stupid cell phone game. The announcer sounded really excited about the “all new, original characters” that are supposed to entice people into downloading the thing. A couple of these fictional appeared on the screen and I almost laughed at what I saw: 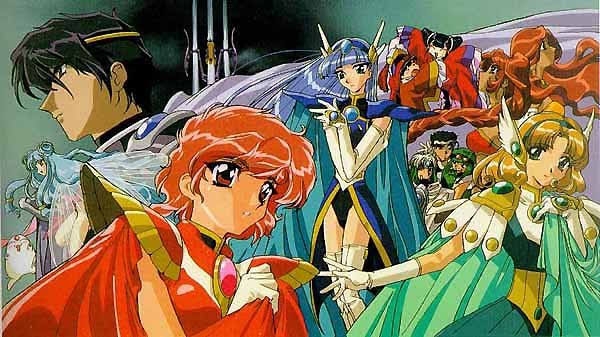 These are the three promary protagonists in Magic Knight Rayearth, a manga that was published between 1994 and 1995.

There’s nothing new or original about taking characters from 90s manga and anime and injecting them into some predictably boring, digital card-based RPG. This is just about the only kind of non-hentai game that comes out of Japanese software studios anymore.

My feet have taken quite a bit of punishment since the boy has come along. Aside from stepping on things, I’ve been stubbing my toes on various safety gates that are supposed to keep him from getting into the kitchen or falling down the stairs. This culminated about a month ago with a definite crunch as my left little toe connected directly with a metal bar. The nail did not survive the encounter and I was afraid that it would never grow back again. My fears were misplaced, though, as a replacement appeared within a couple of weeks to do whatever it is that toenails do.

The human body is very interesting and quite resilient.

Maybe my typing on the phone has deteriorated to the point where the software has given up trying to understand what I mean from what I say, but it certainly feels like auto-correct on iOS has gotten a lot worse since the company moved away from skeuomorphic design principles. Words that should be understood are left with an incorrect consonant in the middle and a plethora of proper nouns get an “a” inserted before the word. “Jason a Irwin” is not a thing any human has ever spoken aloud.

A few years back I had disabled auto-correct for all the lag and bugginess on iOS 9. I turned it back on near the tail end of iOS 11 because everyone swore the system had gotten better. Maybe it’s just better to leave the toggle in the off position.

Asking for the Moon

Last week one of my bosses asked me if there was anything I would need this year to do my job a little better. While I generally say “no” to this question, this time I opted to ask for a more powerful Lenovo notebook. I outlined the reasons, explained the problems, provided the evidence, and listed out my ideal system: a Lenovo ThinkPad X1 Extreme with

Total sticker price after discounts from Lenovo is just over 300,000 Yen, which is about $2800 USD. My boss was in support of the idea but no decision has been made just yet. Instead I may just be given some VM instances on local server or EC2 to spin up when serious number crunching is required. The reason I asked for the beefy system is because many people have said that we don’t get the things we want unless we ask for them, so I asked. Let’s see if it comes to pass.

That’s it for this week. Tomorrow is the start of a 4-day week in Japan, and I hope it’s a good one for everyone.