Joplin as an Evernote Replacement

Evernote used to be one of the main tools I used to keep myself organised. With this software I could keep track of medical receipts, write blog posts, plan lessons1, and accomplish a myriad of other objectives. Unfortunately, Evernote started to have way too much friction in its interfaces near the end of 2013. By October of the same year I had given up trying to use the tool on mobile devices. While I did make an effort near the end of 2013 to use it again, the software just proved to be too cumbersome and I left it behind.

Since then I've used a bunch of different tools in an effort to have what Evernote used to be around 2010. Microsoft's OneNote has tried hard, but their file formats leave much to be desired and I am not too keen on the layer-over-layer effects when trying to type and edit plain text notes. A couple of other tools I can no longer remember the names of tried as well, often coming across as just a plaintext editor with some ugly tabbing in place to simulate notebooks. They all went away as well. I've tried using simple text files, which works great for text, but this generally starts to get too complicated when I'd like to attach an image or audio file to a note. Just because I write notes with Markdown formatting does not mean that I want to first convert the files to HTML before reading them. There must be a better way. 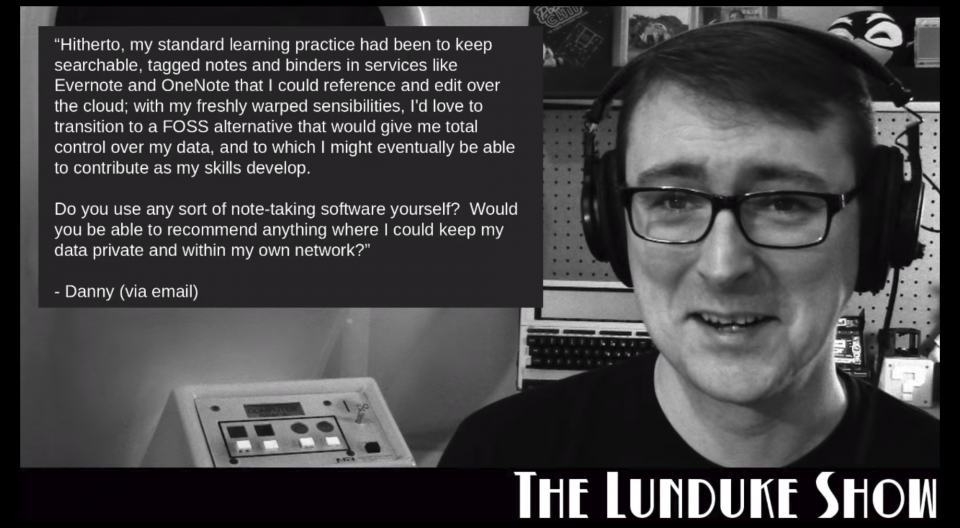 A week or so ago I was listening to an episode of The Lunduke Show and the question came up of what sort of FOSS2 alternatives there were for Evernote. Bryan wasn't aware of any that came close to what Evernote had to offer, but had some pretty decent ideas. One that really stuck out in my mind was to use something like LibreOffice's Open Document file format in order to have something rich like is found with Evernote, as this would enable embedded files and similar sorts of rich content. This is something I haven't considered and liked the idea quite a bit. That said, someone in the comments suggested using a tool called Joplin, which seems to be a very stripped down version of what Evernote used to be, with the added bonus of being able to sync with Nextcloud.

While the application has only been installed on my machine for twenty minutes, I like what I am seeing. It's simple enough for me to jump right in, and the fact that it speaks Markdown natively is a huge advantage over competing products. Now I don't have to invest the time to create something on my own that would likely just be an incomplete solution to a complex problem3. Depending on how difficult it is to edit the Markdown parser, I might just invest a little bit of time to help it understand 10C's footnote formatting.

No promises on when this edit might be available for others to use, though.