Yesterday, while in Tokyo for a couple of meetings, I was given another notebook to replace the Ubuntu-powered MacBook that I've been using the last few years for the day job. The reason for the change was a change in corporate policy that prohibits people in my position from the freedom of BYOD1. Given how much sensitive data I work with on a daily basis, this makes perfect sense. For a long while I had considered requesting either Lenovo's X1 Carbon or the X1 Carbon Extreme. These machines have earned glowing reviews and the Extreme model supports a pair of NVMe drives and 64GB RAM, which would be more than enough to keep up with whatever workload I might throw at the machine for several years to come.

As I was taking too long with the decision, a colleague got in touch over the Christmas break to say that someone had retired and their X1 Carbon was available. Everyone seems to have learned that I would much prefer a Lenovo over the company-standard Dell XPS line, so sending the unit my way made sense. I asked about the specs and was disappointed to learn that it was a 5th generation model with just 8GB RAM, a Core i5 U processor, and a 1920x1080 screen. Standard fare in the business world, but not something that really stands above the 2015-era MacBook Pro that I've been using over the last few years. As I'm generally not in the habit of asking the company to spend money, I agreed to pick up the unit the next time I was in Tokyo.

I do not regret the decision. 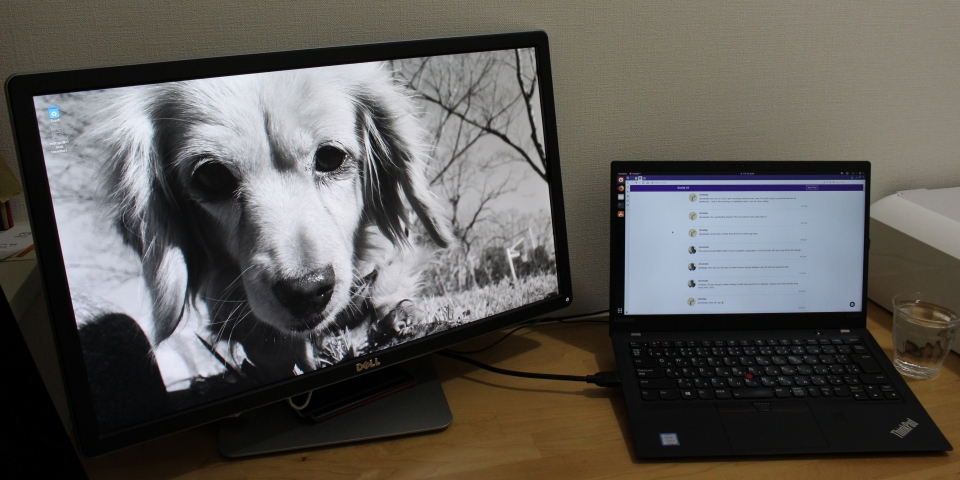 Despite the specs outlined above, the notebook shipped with a 512GB NVMe SSD drive that I clocked transferring data at 3,177MB/sec., which is well over 10x faster than the pair of SSDs that sit in my Lenovo workstation/server. Ten. Times. Faster. Despite the limited amount of RAM and the lower-powered U-series processor, the raw speed offered by this storage medium has more than made up the difference. As with most Thinkpads, the keyboard is an absolute treat to use. The TrackPoint nib is more than welcome on any device I use2 and the touchpad is just as accurate and responsive as the magic slab of glass found on Apple's devices. As one would expect, the unit arrived with a fresh Windows 10 installation and I quickly replaced it for stock Ubuntu 18.10, opting to not use an LTS or the MATE desktop for a change.

After just a day of use, the machine has quickly become my favourite computer of all time. While I was not particularly keen on using a lower-resolution display, the screen looks absolutely wonderful with Ubuntu. Characters are sharp and easy to read. Colours are vivid. The brightness — when not in direct sunlight — is more than enough for my eyes. A higher-resolution, 500-nit display would be nice, but it doesn't seem necessary given the fact that there's already a 24" 4K display sitting right next to the notebook. This machine will do just fine for the next couple of years, particularly when all of the heavy-CPU tasks are farmed out to the work-provided Core i7 Thinkpad W541 that sits in the cold spare room upstairs.

My personal notebook will continue to see use on the weekends and when I'm doing non-work-related development, of course. A good machine will never go to waste in this house. Its days as a heavy-lifter, however, are over.

It's interesting to think back on all the work that's been done with a computer. The MacBook helped me accomplish a great deal more than any other computer before it. Two LMSes, two major versions of 10Centuries, and dozens of smaller projects were written with the device. Hundreds of terabytes have been written to the storage medium. Several petabytes of data have travelled over WiFi and the USB ethernet adapter. Hundreds of hours of podcasts have been recorded, and thousands of hours have been edited, with the machine. The notebook was the primary tool that allowed me to earn the money that went made a mortgage and a new car possible. In how many professions can a person point to just one piece of hardware and say "without this, I would be nothing"?

Were there pain points with the machine? Absolutely. The more recent versions of macOS slowed the device down noticeably and introduced quirky problems in applications that had been perfectly rock solid before any update. APFS, Apple's new file system, introduced more uncertainty and lag than anything I'd ever seen beforehand. Even when disabling the deep iCloud integrations the system would have difficulty keeping up with my typing speed. Frustratingly these issues persisted even after wiping the device clean of all data and starting over.

All of the problems vanished after moving to Ubuntu MATE, though. The notebook went from being a sluggish device to a faster-than-lightning tool that easily kept up with all but the most demanding of tasks.

Back to the Lenovo, what's interesting about this unit is that the BIOS shows that the system has less than two weeks of operational time logged. Despite being in the possession of a colleague for a year, it sat unused. So while there are a few fingerprints on the device, it is still very much a brand new machine. Now it's my brand new machine running stock Ubuntu. And I am quite happy with what I see. The home office is very much a happier space.