Has the smartphone market finally entered a recession after nearly a decade of bullish sales? This appears to be the case according to some analysts. Given the number of devices that have been manufactured over the last ten years, it's quite surprising that we didn't hit this point earlier. Just about everyone who wants one of these pocket computers has one, and replacement cycles are extending because the devices people bought two or three years ago continue to serve them well enough that the hassle of replacing a device is greater than the benefits that would be gained from a faster processor or better camera. What's interesting to me isn't so much the slowing market, but the growing number of people who say something like this: 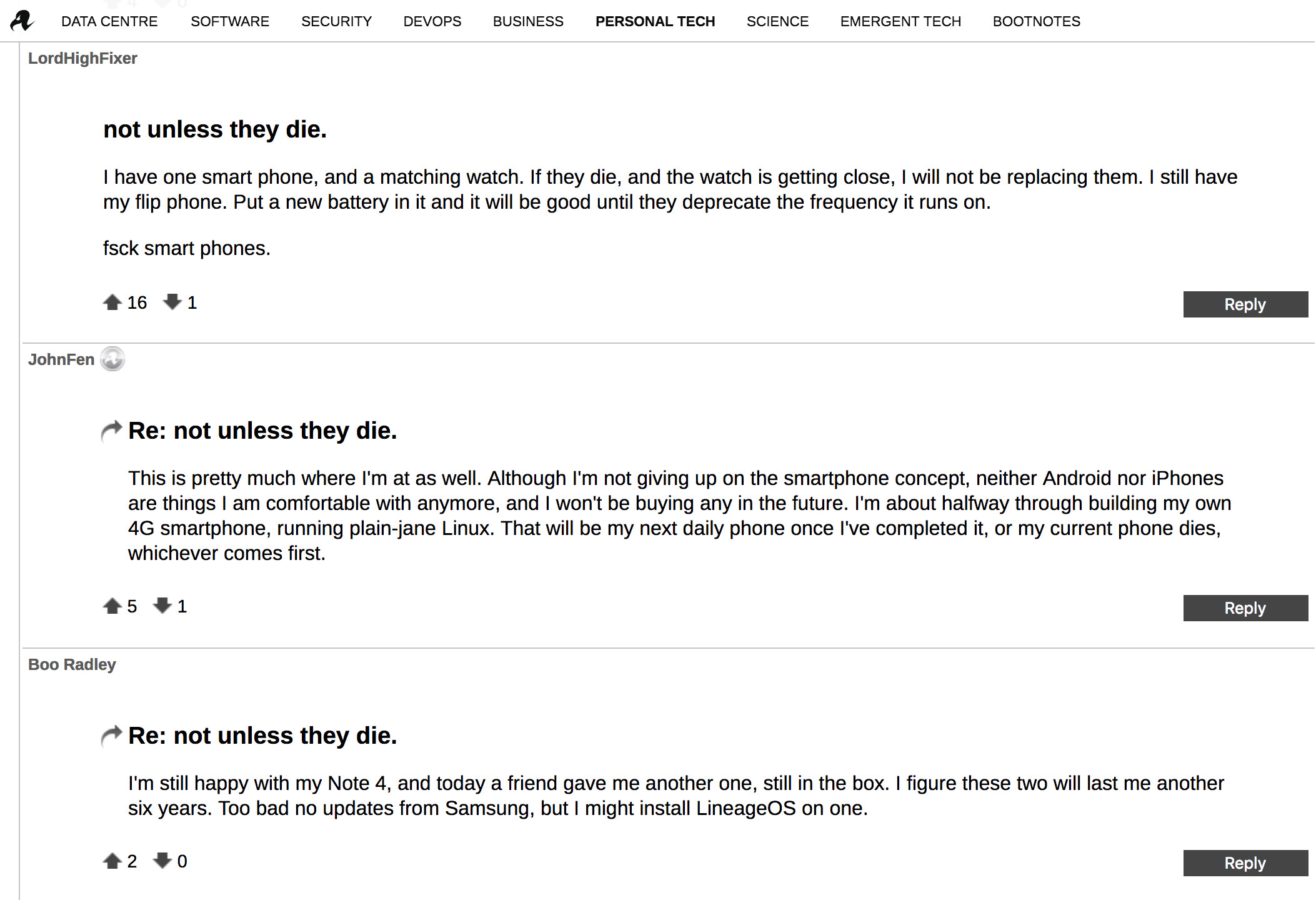 In the last few years I've met with a couple of people who gave up their smart phone for a flip phone and say they are happier for it. A growing number of people online seem to share a similar desire to return to something simpler, primarily because the cost of replacing a device that cannot be easily repaired has reached "peak stupid". Some refuse to go with a cheaper Android device because "Google spies on everyone", and others refuse to go with a used iOS device because "Apple kills older batteries". Flip phones, however, see almost no innovation, no love, and have no problem allowing people to easily swap batteries whenever they please.

Ultimately a growing number of people want devices with better battery life and a healthy respect for privacy that they can repair. Until the Librem 5 is released, there isn't a phone on the market that I'm aware of that checks all these boxes.

A few months back I had to give up my iPhone for a little while as Reiko broke hers. She makes and receives more calls in a day than I have in a year, so it made sense for her to take mine after swapping the SIM. For five weeks I went back to using an old iPhone 5 like an iPod Touch1 and using a company-supplied flip phone when a call was required. It was an interesting change. When Reiko had her phone repaired and I could get the newer iPhone back, I didn't immediately get a new SIM for the device2. Heck, three months have passed and I still don't have a SIM in my iPhone … and I like it this way. My phone is essentially a mini-tablet with 2-day battery life because the LTE radio isn't being used. Need to call me? I have a work-supplied flip phone that works just fine for that.

When I think about how much money I've spent every month for the luxury of having a smartphone, I wonder if I can say the convenience was worth the price. Yes, I enjoy communicating with people on 10C Social and I enjoyed chatting on ADN while out and about during the day but, now that I work from home all but two days of the month, it doesn't really make sense for me to pay $70 a month for a phone number I rarely use and a data plan that is seldom utilised.

A simple flip phone plan can be had in this country for about $10/month. Data can be bought separately in 500MB ~ 5GB chunks for anywhere between $10 and $50 depending on which provider you choose. This makes me wonder if it's possible to find a dual-SIM flip phone with a decent battery that has a WiFi radio for tethering. It would be nice to have just a simple device for phone calls that can be charged once a week and tethered to when the need arises. By having a dual-SIM device, the primary SIM could be used for phone calls while the second one used for prepaid data. Many prepaid plans in Japan are valid for 90 days, which would suit me just fine.

Would a device like this appeal to a large enough market to make it a viable product, though? Far too often people have said they wanted a thing, only to change their mind when it became available. Smartphones are convenient, attractive, and addictive. How many of us would really give them up?