Apple makes some pretty slick-looking tools that enthusiasts and professionals around the world pay good money for. Unfortunately, despite all the gleam and lustre, the products are ultimately designed by people who are operating within various constraints. Sometimes those constraints are from management. Sometimes they're from the laws of physics. Either way, these constraints resulted in something affectionately called "staingate" across the web, which is a condition where the anti-reflective film placed on the glass displays of Apple's Retina MacBook Pro devices would deteriorate with time, often as a result of coming in contact with various acids found in cleaning agents, beverages, and — worst of all — fingers. Less than a year after using my notebook, the screen started to deteriorate. As I had bought the unit used, Apple was unwilling to do anything to resolve the design defect, and I opted to ignore the issue as much as possible.

Until today, that is. Today I learned by accident that it's possible for a person to make the screen look as good as new again. All they have to do is remove all of the anti-reflective film from the screen. To do this, simply put some glass cleaner or mouth wash on the screen and let it sit for a couple of minutes. Then, using a soft cloth or paper towel, scrub the film off with a bit of pressure. All in all the process shouldn't take more than ten to fifteen minutes and you'll be left with a screen that looks brand new1. When I completed the scrubbing, I was absolutely shocked with how gorgeous the screen looked again. It was smooth and impeccable, just as anyone would want a screen to be.

Unfortunately … I had a small problem afterwards.

Like any display, the screen of the MacBook Pro does not like to have any pressure applied to it. While I did take care to not scrub too hard, I clearly didn't take enough. On two corners, where the film had deteriorated the worst and looked like garbage, I must have used excessive force when removing the anti-glare film because the screen is clearly damaged. The display hasn't cracked or shattered, but there are angled light streaks that go from the corners towards the centre of the screen. Just as with the "staingate" issue, I can ignore this more or less when not working with a white background. However, it's frustrating that the consequence of trying to fix the screen of my notebook has resulted in a different kind of damage.

Despite just saying that I would ignore the issue more or less, I took a look at some current MacBook Pro models on the Apple website. Given the amount of data that I work with on a regular basis, I would really like my next computer to either ship with 32GB of memory, or at least support it later via an after-market upgrade2. This means my choices are limited to the 15" models, which do look pretty darn attractive with their 6-core processors and dedicated graphics cards.

While on the site, I noticed a banner across the top stating that my current notebook might qualify for a discount via a trade-in program. My machine would be "recycled" somehow, and I'd receive credit towards a newer unit. A nice idea, even if I might not do this in reality given the awful trade-in prices one receives when selling to for-profit organisations. Still, just how much could my current machine save me on a new model? Let's see … 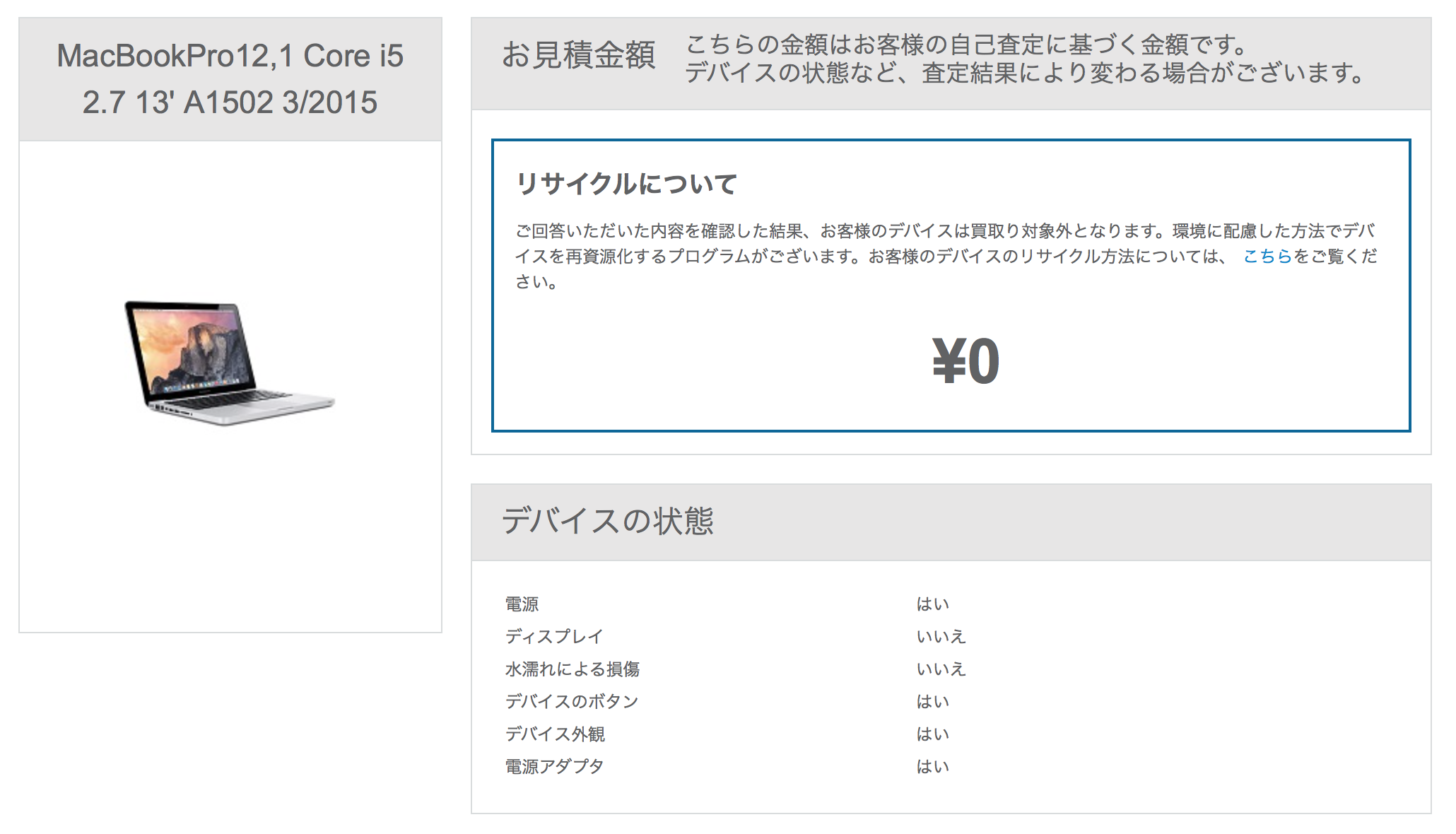 Apparently, my early-2015 13" Retina MacBook Pro with 16GB RAM is worthless because of the damaged screen. Everything else works well. The battery can still provide just over 8 hours of life so long as I'm not running VMs or powering a bunch of peripherals. The keyboard is flawless. The touchpad is perfect. The exterior has zero scratches and only minor signs of usage around the ports. the power adapter has zero signs of fraying because I don't wrap it up like an obliviot. Seriously, the only thing remotely wrong with this notebook is the two damaged corners of the display panel, which I could probably find online for under $300. Yet Apple's authorised recycling place says it's not even worth having it looked at.

All that aside, if I were to pick up a new machine from Apple, the notebook would cost just over $3,000, which is about $200 less than the competing Lenovo Thinkpad X1 Carbon that I've seen colleagues at the day job request. Given the price tag, I think I'll just make due with what I have until it's unbearable. If it comes down to it, there are plenty of second-hand retina displays online. Just because Apple Japanese recycling partner doesn't think my notebook is worth anything doesn't mean I have to agree with them. This notebook has been my primary tool for a few years and it still has plenty of life left in it.