Not Evidence of Absence

Over the last few days there have been a flurry of articles across blogs and news sites on the results of the Breakthrough Listen Project's first year. Long story short, they haven't found any definitive evidence of radio signals within the 1~2GHz band from an extraterrestrial intelligence reaching our world after 12 months of listening. As someone who has actively participated in the [email protected] project, where radio signals from beyond our atmosphere have been collected and analyzed by computers volunteered to the effort for over 15 years, this comes as no surprise to me. That said, a bunch of people seem to feel this effort is little more than a waste of money at a time when it seems that science is under siege by wealthy interest groups and willfully ignorant leaders. To these people, I'd like to remind them of the old axiom that an absence of evidence is not evidence of absence.

A decade of research in the 60s and 70s identified that the most promising radio frequencies for extraterrestrial signals was somewhere within 1,000Hz and 2,000Hz as it was relatively absent of interference from naturally occurring interference throughout the known universe. As this 1GHz band has proven itself to be empty of data transmissions as we understand them, scientists are now collecting data from frequencies above 2Ghz. Considering how many radio frequencies there are to scan, we could be looking for a really, really long time.

One of the things I try to remind people of when this topic comes up is that the universe is really quite old, and our technology is really quite young. There's no reason why we should assume that an intelligent alien community would limit itself to radio frequencies that are limited by the speed of light and capable of being easily monitored by "adolescent" worlds such as ours. Our own form of communication has evolved so dramatically over the last 500 years that people during the Renaissance would have no concept of how you and I are able to communicate. Add another 500 years to our development, and the technology that people use in 2517 will appear as magical and inexplicable to us as a cell phone might to Leonardo DaVinci. If we do find evidence of extraterrestrial intelligence via radio signals, then chances are they are making themselves known to technologically inferior species, or they are at roughly the same technological level as we are. Given the sheer size of the universe, it's certainly possible that there are worlds besides ours with something akin to our 21st century tools, but within a few a few hundred light years? Perhaps not.

To illustrate the point, humans have been sending radio transmissions into space mostly accidentally since Reginald Fessenden made a weak transmission of voice over the airwaves in 1900. Marconi's famous Transatlantic transmission happened in 1901. At the speed of light, that means our very first transmissions would have travelled no farther than 117 light years. The image below shows a two-hundred light year radius around the Earth in relation to the size of the Milky Way Galaxy, which is just one of billions of galaxies in the universe. 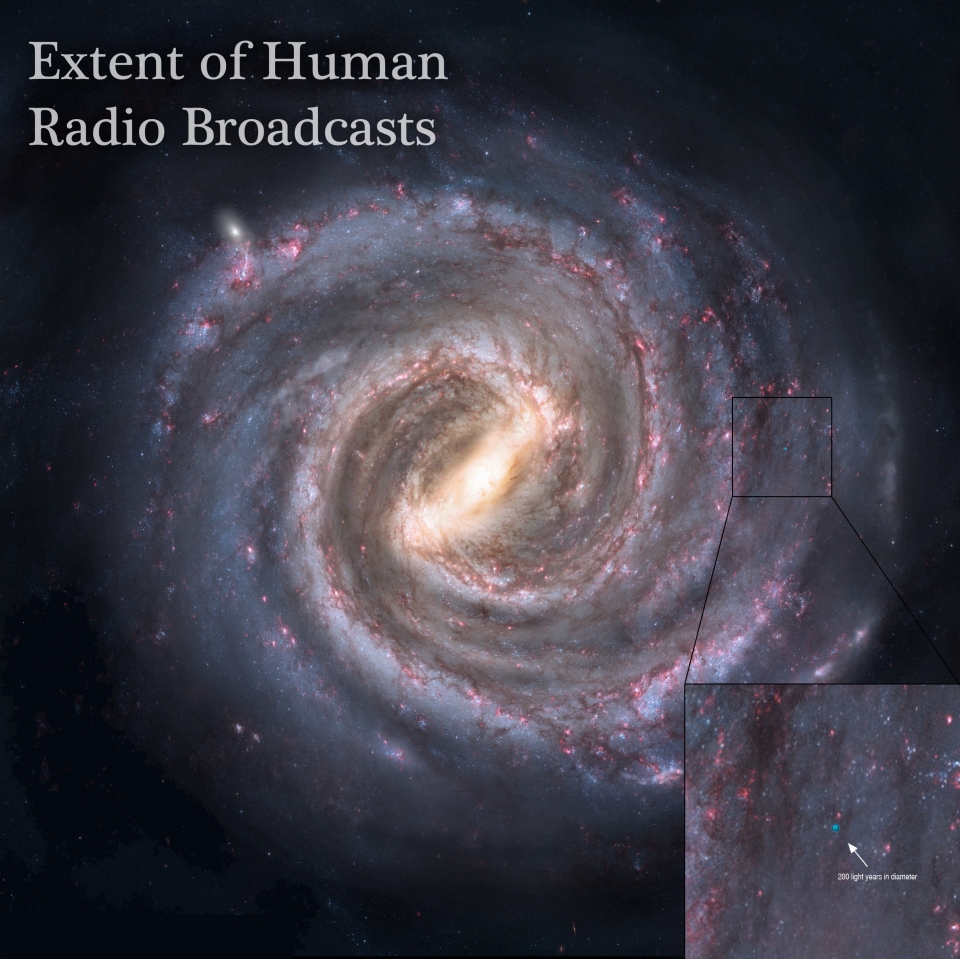 We've barely scratched the surface of what's in our interstellar neighbourhood, let alone what's in the Milky Way, or the Local Group, or the visible universe, which is just a tiny portion of our concept of reality. People can certainly complain that the search for intelligence beyond our own atmosphere is a waste of our artificially limited resources, but to complain that we haven't found something even after decades of search is silly. The universe is a big place, and we're just starting to learn how we fit into it. As our technologies continue to evolve, so too will our investigative methodologies. We all just need to be a little patient.