Yet Another Set of Broken Audio Cables

Back in January of 2015 I picked up a pair of Audio Technica ATH-IM03 earphones that, to this day, are capable of delivering the greatest sound quality I've ever heard come out of a digital device. While the sticker price was a little steep, the higher quality of sound and ability to swap out the cables made the decision easier to make. Heck, I even said as much at the end of my quick little review of them almost two years ago:

On a final note, the primary reason I replace headphones is because one of the two sides cuts out. This happens over time as wires begin to fray and connections become weak. This happened with the previous pair of Audio Technica CKM500s that I used, the Logicool Ultimate Ears 200s, and every other pair of cheaper earbuds I used prior to taking sound seriously. The ATH-IM03s should last remarkably longer because, unlike the earbuds I just mentioned, replacement cables are available and easily swapped out. Should I run into a dead earbud, then a quick trip to a music shop and 30-seconds of wire-swapping should resolve the issue.

This ability to swap cables seems to be both a blessing and a curse, because in the 21 months I've had these earphones, I've managed to go through two sets of cables. 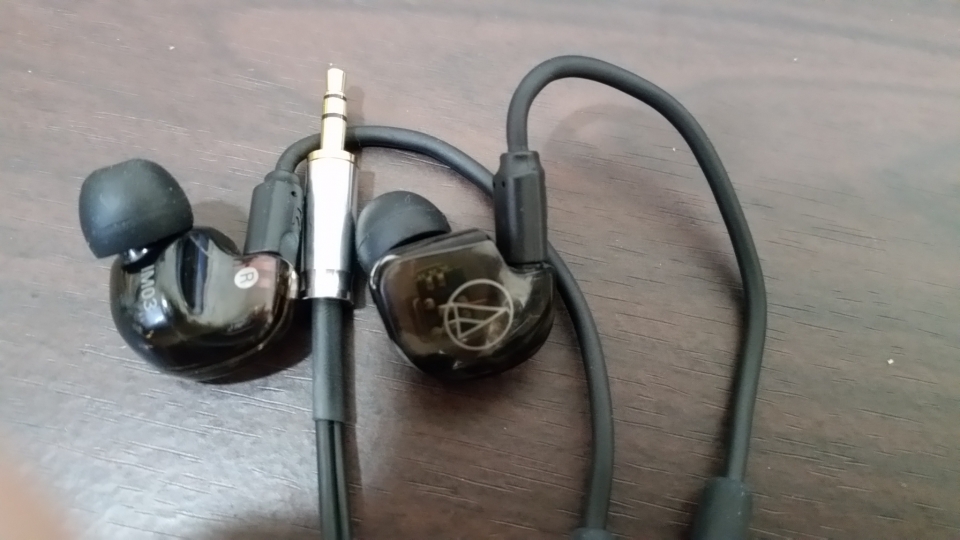 The first set of cables that shipped with the earphones became still and one wire finally cut out up where it enters the left "over the ear brace". The second set of cables were quite pricey and a lot more flexible. Unfortunately the left-ear wire cut out near the 1/8" 90˚ jack. I'd love to know what it is about the left ear that my phones dislike so much, but I'd settle for having a pair that last 18 months to two years. I've been a strong proponent of Audio Technica equipment thus far, having bought four of their microphones, three sets of headphones, and three sets of earphones over the last few years, but this cabling issue is frustrating. I treat my equipment with a great deal of respect because I want it to last. I wonder how often I'd be replacing hardware if I were more rough ….

Regardless, I've kept the receipt — but not the box — for the broken cables and will get them swapped out the next time I head downtown. Until then I'll be walking around with Apple's EarPods and wondering how anybody can possibly use the white plastic units outside of a quiet room.