Nobody Drives In Japan. There's Too Much Traffic!

32.8 km. 93 stoplights. 81 red1. 1 hour 18 minutes of travel time. It's no wonder drivers in Central Japan have the highest number of accidents when the average cruising velocity is just barely faster by car than it is by single-speed bicycle. I've complained about the traffic light timing before, and long drives just compound my dislike of the Japanese roadworks infrastructure. It's like the cities want us to take non-existent trains to our destinations. 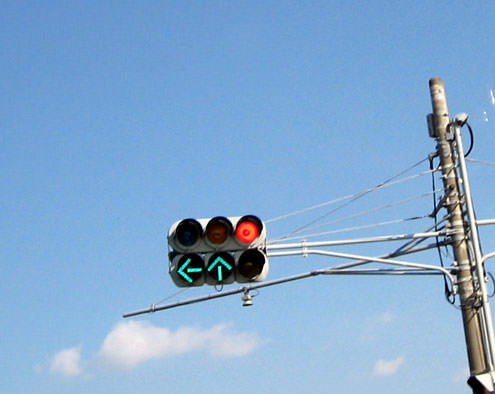 My 2009 Daihatsu Move can achieve a fuel consumption rating of 24.8 km/L on the open highway2, but rarely exceeds 14.4 when driving through the "highways" in and around Central Japan. The way lights turn red right before you approach them is darn near sinister because it really doesn't matter how fast you drive. Unless you're pushing 130 kph in that school zone, you're not making that next light. Period.

How long are red lights? Anywhere between 45 and 150 seconds. I should know. I've been timing them for months. There has got to be a better way to ensure that traffic moves at an acceptable rate while being slowed down every so often so people don't exceed the speed limit by a wide margin. If regional governments are serious about conserving power and protecting the environment, one would think that ensuring the traffic lights worked with the vehicles rather than against them would be a top priority.

Clearly I'm just a silly foreigner who doesn't see the beauty of sitting in an idling car for 43 minutes 12 seconds at 81 red lights to travel less than 50 km … a veritable stone's throw in the corner of the world I grew up in. Nevermind the additional fuel that is consumed with each acceleration cycle.

So, rather than simply bitch and moan on this site, I've gone the extra mile. Since I had ample time yesterday, I worked on my 履歴書 (Japanese resume) and a cover letter for the Aichi prefectural government3 and a few city halls. I will gladly work on this problem for a few months, determine an optimum light-switching pattern, and make this area go from a place mocked for it's bad drivers to a place people flock to for its red miso and well-timed traffic lights.