As many people know, I work for a company that develops mobile applications in Tokyo. One of our most popular apps is a Twitter client for DoCoMo, and it's been my responsibility to maintain the APIs as well as the back-end servers that keep our systems running smoothly. By following past Tweets, you can probably surmise that our main infrastructure is powered by Amazon's EC2 cloud computing system, and that it's been beefed up and hardened since it came crashing down on New Year's Day due to the instantaneous flood of good wishes and messages. 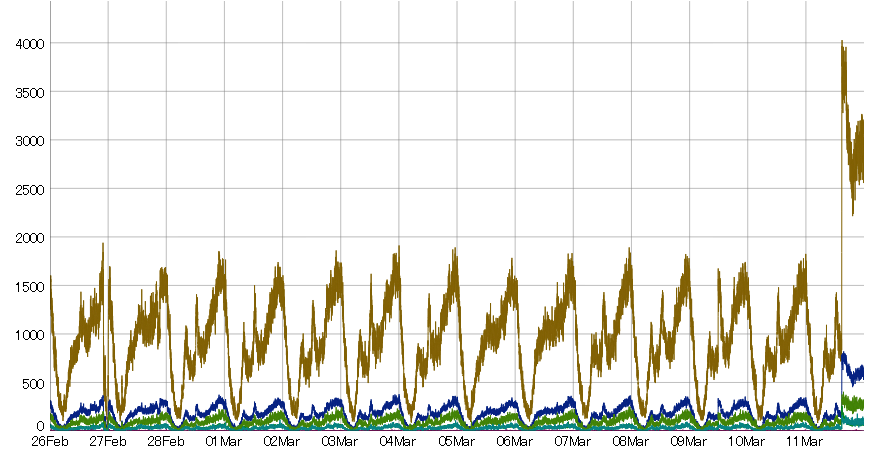 That's two week's worth of traffic, aggregated by the minute. The big red line marks how many people are updating timelines, the blue line marks the number of tweets being sent. The other lines are for other functions, like uploading photos and searching the timeline. Application usage follows a very simple pattern: People wake up, tweet on the way to work, slow down, then tweet about lunch, slow down again, then tweet on the way home and while watching TV at night. A very standard pattern, and one that's seen for countless mobile applications across the world.

That huge spike was the moment the earthquake hit, and traffic barely dropped in the 8.5 hours after the fact.

Making phone calls and sending SMS messages were impossible for four to five hours after the quake. All people had to communicate with the world and talk to loved ones was data. Thank God Twitter didn't go down, or my servers.

During a crisis like this people are desperate to get information about friends and family. Had it not been for the countless Internet tools people have available, many of us would have likely done some crazy things in order to get home and make sure our families were safe.