Today at 2:46PM a large earthquake measuring 8.9 hit the east coast of Japan, shaking a hundred million people and sending an untold number under their desks for safety. From many reports this is the 7th largest quake in recorded history, and every emergency worker is busy putting out fires, finding people in the rubble of collapsed buildings, and saving those stranded from tsunamis across the east coast.

I was sitting at work when the earthquake struck. Within a minute the Mrs. called to say it was a big one and advised me to get out of the building. Though the office didn't collapse, it was quite a shake-up. It should be noted that many of the buildings in the neighborhood withstood the shaking without too much structural damage, however, the cell phone network was completely swamped with phone and SMS traffic. SoftBank was completely unresponsive across much of the area. DoCoMo and Au, while also heavily congested, didn't seem to suffer the same failure.

On an aside, my Application and Database servers did not crash and were able to handle the 480% spike in traffic, which has remained steady for the last three hours. Yay to me!

What's sad, though, is the amount of destruction that has swept across Japan's eastern coast. 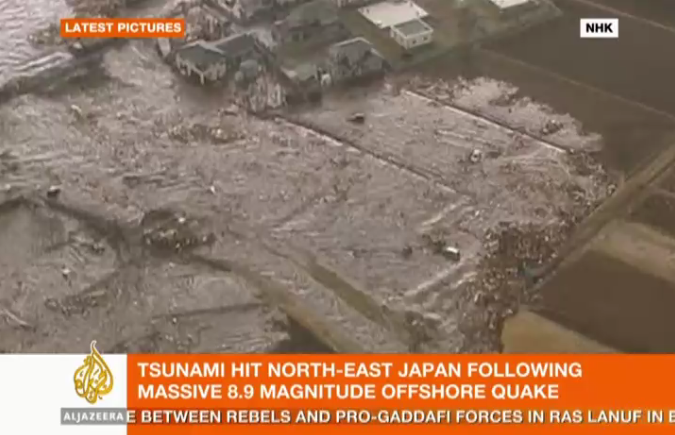 There have been some fatalities reported, and the damage (ecological, economical, and psychological) is completely beyond numbers. People will need years to rebuild what's been lost, and this will have major implications for Japan's food supply for the next five to six months. Hopefully this disaster will give politicians reason enough to set aside their pitiful territorial pissings long enough to help those in need.
Edit