Everything I've Refused, I Have Now Consciously Accepted

Throughout our lives, we make conscious decisions about the things we will and will not do before they happen. These decisions can be something simple like "I will not smoke", to something very complex like "I will never support Company X because of their CEO's stance on Subject Y". Most of us are lucky enough to make the decisions that will guide our futures towards success, while others consistently make the wrong choices and end up struggling their entire lives.

I don't fall into either extreme, but there have been quite a few decisions I've publicly stated which I've had to re-evaluate and later modify … throwing into question the credibility of any strongly-stated decision I have made in the past.

Thinking back to every strong decision I've made (and changed) as a young adult, this is one that sticks out in my mind the most. I was frustrated with not being able to find a job in Southern Ontario where my skills could be put to use. I had the education, but no real work experience. I was incredibly over-confident in my abilities, but unskilled when it came to job hunting. Luckily, a cousin offered me a job at the Burger King she managed, and that acted as the stepping stone to every job since.

Some time in 2000
Friend: Why don't you buy a Mac?
Me: If I wanted an expensive paperweight, I'd buy a rock.  There is nothing Apple produces, or will produce, that I will want. Ever.
March 2010: Installed OS X in a virtual machine on a notebook to begin development for the iPhone
April 2010: Bought an iPod Touch … my very first Apple purchase 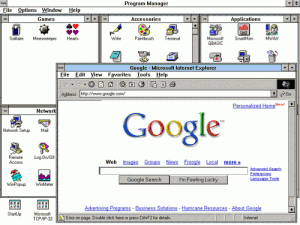 Of all the things I've argued, this is the one I've worked hardest to argue. For over 15 years, my entire computer experience revolved around Windows-based devices. I've used every Microsoft operating system since DOS 3.0, and every version of Windows (including CE and Mobile) since 1992. Almost every piece of code I've written has been for a Windows-based system. Almost every hardware purchase took into account driver stability on an expected set of platforms. And I was happy with this for a very, very, long time.

But, as with everything in life, things get old. Microsoft has failed to innovate in a way to keep me excited, and I'm really tired of being everyone's "free" tech support guy. If anyone asks me for an opinion on something, I now tell them to buy an Apple device. Not because of the coolness factor, or the sleek designs, but because people expect these things to "just work", and Apple has been able do that better than Microsoft in recent years.

My preferred platform is still Windows, but I'm no longer an Apple-basher.

Not Sure When
Friend: Why not use GMail?
Me: Why would I want to give Google complete access to my mail? They already know too much about me!
January 16, 2010: Successfully migrated 14+ years of email to a new GMail account and made this my default email & calendar client, killing Outlook at last

I've mentioned a few times in the past that I would never use GMail to host my email account, often going out of my way to use dedicated mail services with limited capabilities. That said, I'd grown tired of being unable to effectively synchronize my mail between two notebooks and a PDA, so opted to make the switch to Google's solution. Less than a week later, I wondered why I even bothered arguing about the issue in the first place.

March 2007
Friend: Have you tried Twitter?
Me: Ugh … what's the point of that stupid site? Seriously … it's more limited than IRC, and shorter than SMS. It's nothing more than a short-lived fad.
September 2008: Joined Twitter

Yes, my first impression of Twitter was marred by an over-excited tech community of bloggers who have all disappeared into obscurity, now … but I'll admit that I didn't quite see the potential of Twitter as it seemed to be little more than a HEY LOOK AT ME! self-promotion machine. While some people continue to use the service that way, most of us have turned the popular micro-blogging platform into a simple way to communicate with a large number of people.

That said, I would also like to take this opportunity to thank Twitter for killing most blogs. There were far too many "make money online" wannabes spamming the Internets … and now they're (almost) all gone.

Mid-2006
Friend: Why don't you live in Tokyo?
Me: There are too many people in Tokyo, and Reiko wouldn't feel comfortable living there for a long time.
June 2010: The Mrs. and I are looking for a home closer to Tokyo

There are a lot of things that I've said I wouldn't do, and this is one that I was almost 100% sure about just a few months ago. That said, when opportunity knocks, we'd be a fool not to answer the door. Five days ago I was officially accepted for a position at a software company in Tokyo's Azabu-juban area, so the wife and I are preparing to move to the Big City. We've scoured the housing sites for days, and narrowed down our choices to a few decent homes about an hour's trek from work.

Who knows … if success throws open the door and I'm somehow earning more money than I can spend, perhaps Reiko and I will even buy a house there. Only time will tell.