Many years ago, when the sole purpose of every day was to have fun, I would enjoy the well-planted1 swing sets on the grounds of a nearby school. On days when the sky was an inviting blue with a little bit of cloud, I'd be on the seat closest to the middle, trying my darnedest to reach as high as I could as though it were possible to physically touch the distant vapour from such an altitude. The perception I had on the up-swing was that the sky was reachable, if only I let go and jumped for it.

As one would expect, I never jumped.

Over time I stopped playing on the swings as new interests took priority and any memory of the impulse to leap into the sky became buried in the past with so many other childhood ideas. The desire reach the sky and enjoy the exhilarating feeling of free movement has never gone away, though. 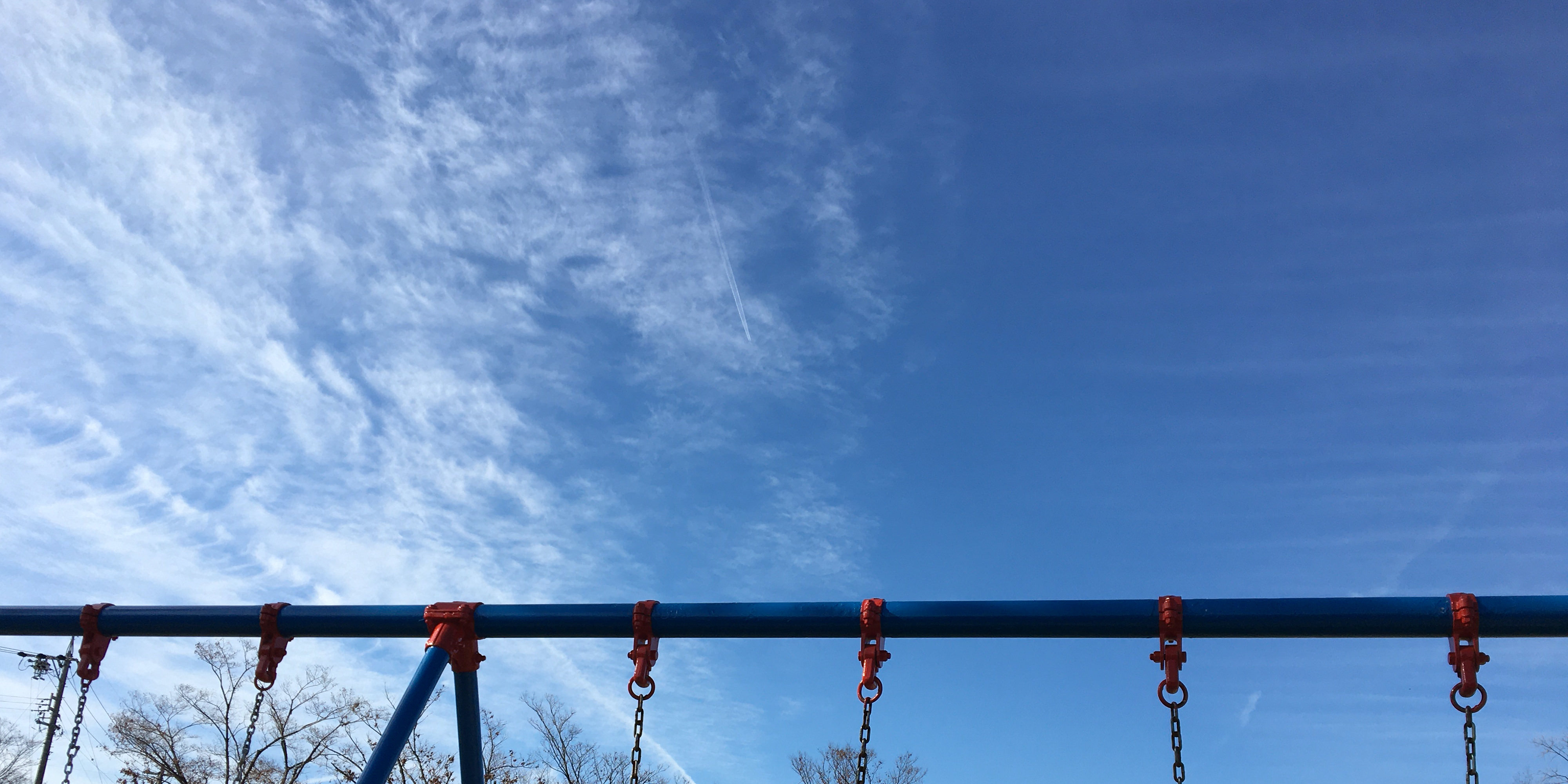 Like many toddlers, the boy loves to head outside and spend time in the park. We'll enjoy the slide, the sandbox, the springy-animal rides, and other activities, but the one we both enjoy together is the swing. He gets to sit in his protective seat first and then I push him until he has the momentum to swing for a few minutes on his own. He's even figured out that if he kicks at just the right time, he can gain a little height. That said, there's still quite a bit for him to learn before he can take on the challenge by himself. While he's swinging, he'll tell me to get on the seat next to him and join in on the fun, which I have no problem doing. It lets me imagine once again that I might be able to fly, if only I let go and jump for it.

The idea is completely irrational, as jumping from a moving swing at my age would certainly result in torn clothing, broken bones, and a bruised ego. Yet the soul yearns for the unbridled joy that comes from flight.

I sometimes feel the same thing when Nozomi and I are out for a walk on a clear night. The stars shine so brightly and the sky is so immense that I long for the ability to visit some of those distant points of light despite the obvious challenges that would come from travelling several light years through the unforgiving expanse that separates us. It is almost as though something inside me is saying "Go!".

One of the first times I ever listened to that desire was nearly 18 years ago when I packed up and moved from Hamilton, Ontario to Richmond, British Colombia. The 4,888km trek was to escape the endless cycle of everyday life that I'd found myself in as well as to discover just who the heck I was. A person can make this kind of move at the age of 22, though, as the risks are relatively low when living in a country as safe as Canada. The second time I listened to the desire was five years later, which resulted in moving to Japan. However, the impulse to Go! this time does not seem to be pointed in a horizontal direction. I want to go up.

The proposition is illogical, though. The only people who escape the gravity of our planet are astronauts, some of the brightest and healthiest science-minded people alive. There is no chance for the rest of us to escape the atmosphere and look down upon the globe we call home. Even when commercial space flight becomes available, most of us will not have the luxury of going anywhere but to another terrestrial location. The rational mind knows this and argues with the memory from three decades ago, when a 10 year old me would swing as high as was possible in the hopes of being able to grab a passing cloud.