Like many young children, the boy enjoys going outside as much as possible. He wants to play in the various parks around the neighbourhood, identify cars by colour and make, greet people who pass by, and generally explore the world that we inhabit. When we're out together he insists on riding on my shoulders, standing in front of my legs with his arms spread out as if he could stop me, saying "Up, please" in a tone that suggests he won't take no for an answer … and he never does. 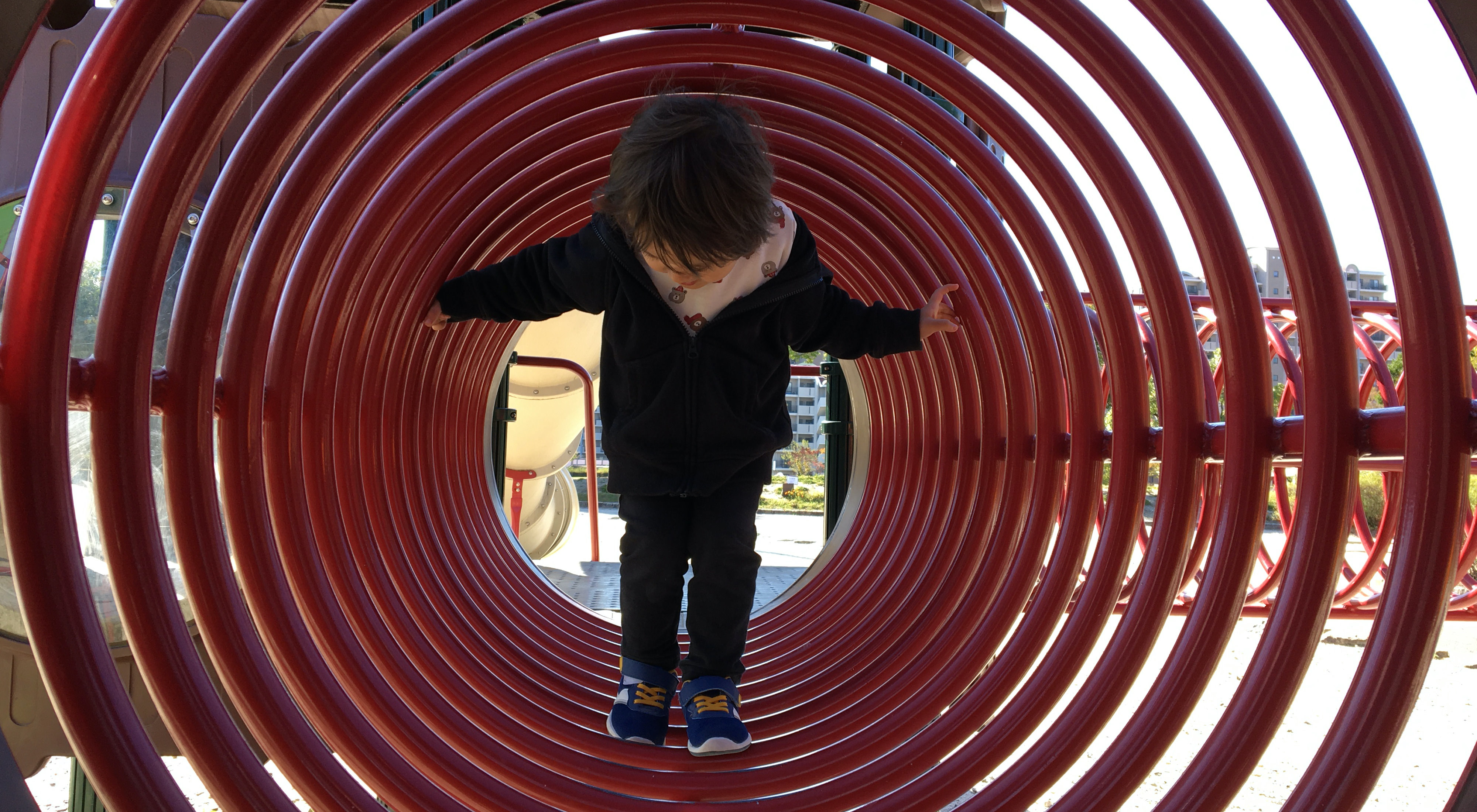 Over the last couple of weeks the boy and I have managed to make a habit of heading out for two walks every day. One long trek in the morning after breakfast, where we walk through as many as four parks in two hours, and another in the afternoon after his nap. As most people are either at work or school by the time we head out in the morning, the parks are mostly empty. He and I can go from the slide to the swings to the sandbox and back to the slide as many times as he'd like. The afternoon is when he gets to learn about patience as the three nearby elementary schools have let their students out. Anyone not staying behind for a club activity will be outside with friends, often on the playgrounds that the boy wants to use.

Watching how he interacts with older children reveals a world of difference between his personality and mine. Even at the age of three, I would keep mostly to myself when surrounded by people. The boy is almost the complete opposite, having no problem running right up to one of his favourite swings and telling whoever might be seated 降りる！, which is a very direct way of saying "Get off". These are teachable moments, of course, as he immediately receives instruction on how to wait in line, or ask for something nicely, or otherwise be more considerate. It makes me wonder how much my parents had to do to help me learn to interact with people, given that I tended to avoid groups.

There is one particular incident from my youth that I recall that involved me being rather upset at another boy my age. My mother would tell me the tale any time I'd comment on how difficult it was to play with one of my younger siblings.

Some time around 1983, when my parents were still married and we lived in a house in northern Hamilton, I was playing with my Tonka trucks in the back yard. Tonka made these rather large toys that looked like construction vehicles, painted bright yellow and made of steel. They were incredibly cool and very heavy for a three year old. A neighbour would often come over for coffee with my mother and her son, who was roughly the same age, would come play with me.

This one particular day the kid really wanted to play with the backhoe, as you could sit on it and use a lever to shovel sand. Being three, I didn't want to simply hand the toy over so I refused to share. He became upset and pushed me off. I, being an incredibly hot-tempered youth, picked up the nearby dump truck and hit him over the head.

Tonka trucks are not the size of Hot Wheels. They're big enough that kids sit on them when playing. And they were made of metal in the 80s. They were heavy, and the blow to the neighbour's skull was rather brutal. There was no blood nor any sign of a concussion according to my mother, but the violent outburst would have resulted in some pretty serious consequences for both the neighbour's son and I. This was around the time when my mother's preferred form of punishment was a spanking followed by standing facing the corner somewhere in the house for hours on end, so this is probably what I had to do. It wouldn't have been a good day for anyone involved.

My son hasn't yet become really angry at another child, but it's only a matter of time. He's incredibly open with his emotions and has a rapidly-developing moral code. He can quickly identify right from wrong and, when he sees something new, he can often infer whether it's correct or not based on the myriad of rules that Reiko and I have tried to teach him. However, anger can change how a person responds to a situation. He knows that he should never hit his mother, but he knows he can hit me when we are playing. Which internal rule will he follow when he's upset with a peer for not sharing a toy or taking something from him?

It will be interesting to watch him learn how to interact with people, handle conflict, show respect to elders, help others, and more. Hopefully he'll be a lot less violent than I was.