Over the last couple of years there has been a growing number of Instagram stickers stuck to windows of shops across the country, most notably at locations where there might be some form of tourism. When the family and I went to Kyoto a couple of weeks back, the colourful "Instagram OK" sign was placed prominently on every building, and it was seen numerous times around — but never inside — the Disney theme parks when we were there this past weekend. Considering the popularity of the visual social network and the various TV shows dedicated to what can only be described as Instagram Tourism, one can hardly blame shops that depend on pedestrian traffic for encouraging photos and other sorts of free advertising. This is, after all, one of the most modern and effective ways to market a business.

However, when every shop is encouraging people to take and share pictures to Instagram, stores need a way to differentiate themselves from others around them. In Kyoto and many other tourist spots, every second shop is offering ice cream, cotton candy, or traditional Japanese sweets. Taking pictures of a generic, vanilla ice cream cone isn't enough to ensure people make a note to visit your store. As a result, one trend that is growing is the unique forms of differentiation that's taking place in tourist hotspots. 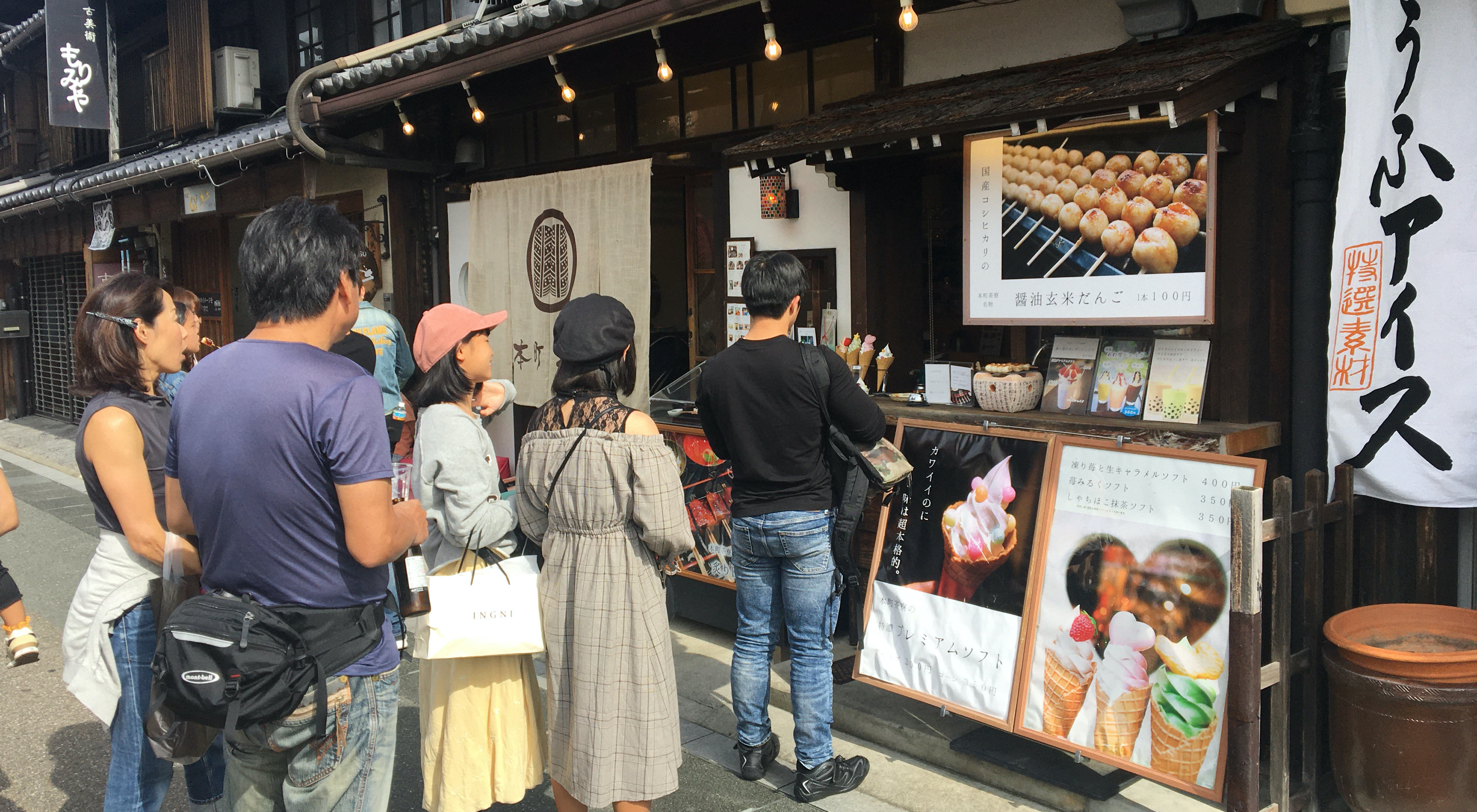 Earlier today, the family and I travelled to a historic street in Inuyama, which isn't too far from here. The plan was to see Inuyama Castle, a place that Reiko and I have seen hundreds of times from a distance but have never visited. Soon after arriving, though, our plans changed from sightseeing to finding something for lunch. The street that we were on had a number of vendors offering treats such as takoyaki1, very long French fries, Nagoya frankfurters2, yakitori3, and every sort of beer you might find at a baseball game. This isn't exactly the sort of meal that is suited for Reiko or the boy, so we moved on down the street until we found a traditional little restaurant.

But I'm getting way off topic. What I wanted to write about was how shops are differentiating simple things … like ice cream.

Ice cream is big in Japan, particularly during the colder seasons4. There are vending machines offering 17 different kinds at train stations. There are giant chest freezers displaying hundreds of frozen cones at convenience and grocery stores. There are soft-serve windows every 15 metres anywhere money-carrying tourists or teenagers might congregate.

Generally when a shop wants to make their ice cream stand out from the crowd, they'll try to find a signature topping. It might be some sort of cookie, or an overabundance of colourful sprinkles, or wafer bars, or sometimes imported chocolate bars5. Last year on one of my work trips to Tokyo, I passed a place that offered ice cream with gold leaf confetti. What I saw today, however, went quite a bit beyond mere tiny squares of real gold. 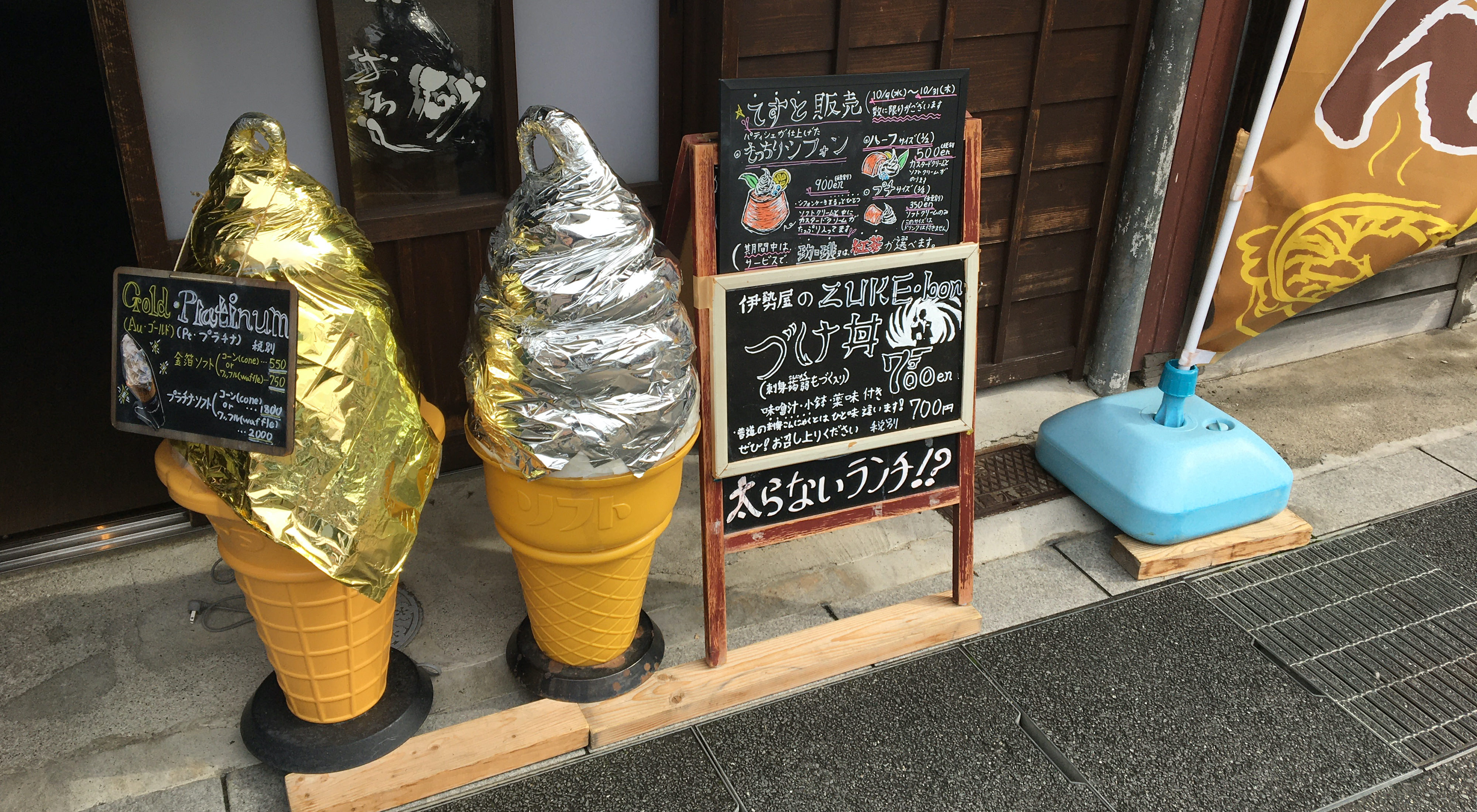 A soft-creme cone with the ice cream completely wrapped in gold leaf for 550円 ($5 USD) or, for the people who really enjoy flushing money down the toilet … literally, there's a soft-creme cone wrapped in platinum leaf for 1,800円 ($16.50 USD). Not expensive enough? For an extra 200円, you can upgrade from a cone to a waffle.

Garnishing meals with precious metals in leaf form is nothing new and dates back — if memory serves — to around the time of the Renaissance in Europe. Given that our bodies cannot process gold or platinum, it's interesting that people would exchange good sums of cash for the sake of a story with some photos, followed a little while later by a shiny poop. That said, if it makes people happy, it can't be that bad. Just don't expect to see me enjoying something like this any time soon. I prefer my ice cream cones boring and cheap.