One of the many wonderful benefits of visiting other countries is experiencing a different culture. I first came to Japan in December of 2005 and, as one would expect, everything was oddly similar yet strangely different. One of the many differences that caught my eye and continues to bring a smile is the country's traditional KFC dinner on December 24th. Other restaurants and food vendors try to sell their own brand of fried chicken but, if you're following custom, it's got to be KFC. This is something I've long wondered about. What could possibly drive millions of people across the country to pre-order a bucket of finger lickin' good fried chicken weeks in advance and pick it up the day before Christmas?

As one might expect, the answer is terribly uninteresting. 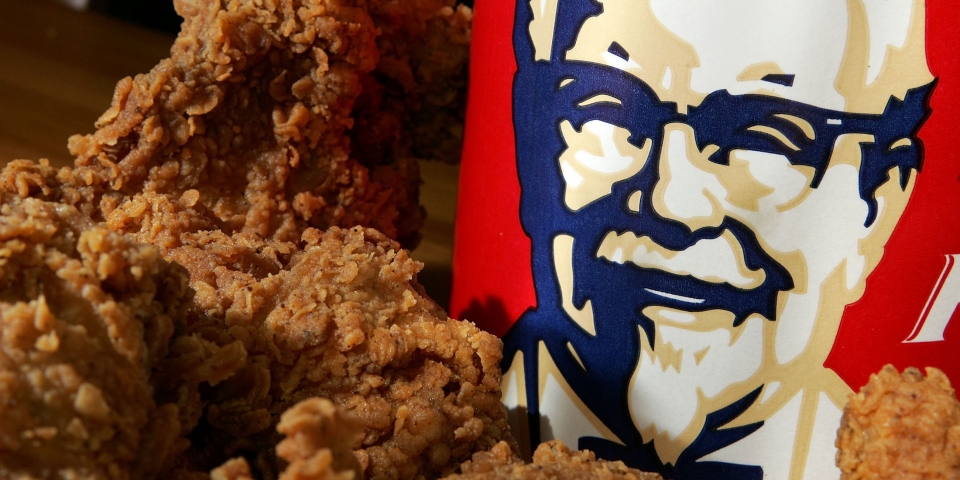 Back in the late 1960s, the foreign community around Nagoya started asking KFC locations if they could prepare some turkey. The traditional western fowl is rarely found in Japan and people who live thousands of kilometres away from home will often go to great lengths to try and bring a taste of home here. This was much more difficult in the days before the Internet and 2-day deliveries from anywhere on the planet. KFC was really the only option.

By 1971 the stores started taking notice and, while they didn't order in any turkey for the expatriates willing to pay for the luxury of exotic bird, they did start communicating the requests to the company's head office. Starting in 1974, riding on Japan's fast standard of living improvements and people's insatiable appetite with foreign customs, KFC launched a campaign featuring Colonel Sanders and Santa Claus, encouraging people to enjoy the holiday season with a bucket of fried chicken. It was pretty much an overnight success, and families all over this island nation have enjoyed the greasy fare ever since.

Interestingly, supermarkets did start carrying turkeys around American Thanksgiving and Christmas time, but you'll rarely find more than 2 birds in stock. Turkey just isn't at all popular here, and most people simply don't have ovens large enough to handle a regular-sized bird. Chickens will never be so lucky.

So there you have it. If anyone talks about how crazy it is that millions of families across Japan dig into a bucket of fried chicken on Christmas Eve to celebrate the holidays, you can tell them it's because of a manufactured tradition reminiscent of Valentine's Day, Mother's Day, Father's Day, and just about any other heavily marketed day of the year.