She's No Titanic, But Just As Memorable

While attending elementary school I was fortunate enough to attend a presentation by a robotics engineer from the University of Toronto. The year was 1987 and, despite the limited computing technology available at the time, he was very optimistic about the future and what machines could do for us going forward. Nine other people spoke that day about their careers and how important it was to study various subjects, but his 15 minute presentation was chiseled into my young mind and its left a strong mark ever since. Not a week goes by where I don't think about the topics he discussed or his enthusiasm for the field.

The following year my school was blessed with, what they called, a computer lab. Ten computers connected to a big beige box in a stuffy, small room with coaxial cable to serve over a thousand students across ten grade levels. Most of us had just two hours in that first year to sit down and use these magical machines to play games in the name of education. The games always had a purpose, of course, and my favorite was one involving the construction of a robot that had to win a race. My friends and I worked together to determine the best combination of components for the machine, which was relatively easy, but then came the hard part: "programming" it.

The thought of programming was still foreign to my 8 year old mind, but the concept was not. Using a set of simple mathematical equations, we had to tell the robot to move its legs a certain distance at a certain speed in such a way that it didn't fall over. Twenty minutes of equation hacking produced the best results, and our robot not only won the race, but it was the only one to cross the finish line. This might not seem like much, but it taught me the importance of mathematics and how something that seems as simple as walking (which is not simple at all) can be described in numbers.

Fast forward 15 years, some friends and I would spend entire paychecks on radio controlled devices. Cars, boats, submarines, and planes. We had them all. We started small, but eventually worked with the less amateur machines. With the emergence of (what seemed like) portable technologies, we started modifying these expensive toys to include items like cameras, WiFi or Bluetooth transmitters, cell phones for extended wireless communication … you name it, we did it. At one point we had built a model plane with a one-meter wingspan that was semi-autonomous. Inside the fuselage rested a Palm Tungsten PDA connected to a Motorola cell phone that was programmed to take over should communications with the flight control computer be lost. GPS was available at the time, but the weight and expense was just a bit too much for a group of young hobbyists. That said, a digital camera was mounted up front to snap pictures every few seconds, and the unit had a maximum flight distance of about 5 km when carrying 2.3 kg of electronics.

The hobby was put on hold, though, after some of the local authorities started paying attention to this weekend fun. It seems that people were nervous about autonomous flying vehicles in 2003, and it was certainly understandable. Autonomous flying vehicles were typically referred to as missiles, so we had to limit our fun to the simpler planes. Not being one to simply walk away from something involving thousands of hours, dollars, and tiny triumphs, I instead focused my energies on the next stage; submarines.

"But wait," you say. "If a plane with a PDA is called a missile, wouldn't a submarine with the same be called a torpedo?" 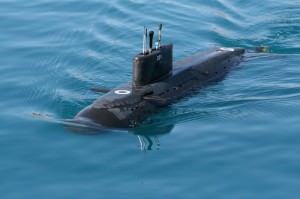 You'd think so, but the Canadian authorities seemed to have less of a problem with this. For six months work on a semi-autonomous sub took up almost every spare moment. It was my responsibility to develop the software that would be used to control the device while it was incommunicado, but there was going to be something different about this project. Unlike the planes that would fly around snapping pictures for fun, the submarine was going to focus on accomplishing simple "missions". We needed a way to give the system a set of goals, and the ability to carry out those goals when it couldn't communicate with us. The first goal: to plant a flag at a specific location.

GPS doesn't work underwater, so this wasn't going to work. The same is said for most radio transmissions. So how the heck were we going to plant a flag at a specific location?

A friend suggested we drop a small device that would beep every few seconds, and the sub would listen for the sound. We learned quickly enough that this wasn't the best solution, but it certainly let us begin on the project. In the fall of 2004 we successfully tested the sub in a pool. Two weeks later we trialled the system in the ocean … and never heard from the sub again.

The software would have forced the machine to give up on its mission after a certain amount of time and resurface. If it couldn't contact the control laptop with its WiFi transmitter, then it would send a message through the included cell phone. No message was ever received. No trace of the machine could be found …

It seems a friend of mine in Richmond never stopped looking for our little project and discovered it off the shores of Richmond about 250 meters from where the beacon was dropped. He sent me a message this past weekend with the news. The electronics, while deprived of power, are surprising still usable as the sealed compartment held for years, though the software is long gone. The Tungsten T PDA didn't have persistent memory, and would not run software off the SD card.

Our ultimate goal with our hobby was to start a business developing autonomous devices that would be used, hopefully, to explore the depths of the oceans and the far reaches of space. Unfortunately, after losing the test sub, our group of geeks lost interest and started thinking more about the jobs they had than the jobs they wanted. One by one, people said they were too busy to meet up on weekends, and the projects were eventually shut down.

A shame, really. But these things happen. I've asked for some pictures of the sunken sub and will post them up upon receipt.

Wonder what the six of us would be up to now had we kept going ….