An Eerie Calm in Kashiwa

It's been less than 36 hours since a magnitude 8.9 earthquake struck the north of Japan, bringing with it tsunamis of disastrous size and proportion. Thousands have died. Thousands more are missing. Tens of thousands are injured. Millions are glued to their TVs to see what's going on and see if loved ones are safe.

The government has asked people to refrain from using a lot of water and electricity as the precious resources are put to use in the disaster areas, and many people are sticking to the quest. Homes across Kashiwa have gone dark … a single dim light seen within. Traffic, which is typically a decibel-bursting reminder that we live in a high traffic area, has been reduced to a whisper. For the first time since moving to Japan, I am able to see the stars in a residential area. The majestic beauty of these distant points of light is lost considering the dire circumstances we get to see them.

It's a scary situation.

The ground continues to shake. Tremors hit this part of Japan every few minutes, and the social networks are hit with a wave of people experiencing a whole range of emotions. Panic. Fear. Anxiety. Frustration. Anger. It's all there, in 140 characters or less for many of us.

Like many people, I was stranded in Tokyo for the night as trains were stopped or completely over-run with people desperate to get home. Throngs of people who lived relatively close to their offices were fortunate enough to walk home, though it was a six to seven hour trek for many. At 4 am anyone who was sleeping woke up to a relatively large quake that sent many of us dashing for cover. From this point, most of us couldn't get any sleep and planned the best way home.

Limited JR services started at 7:00, with more lines opening from 8:00. I left for Ueno Station by foot just before 9:00 and arrived to witness what looked like a large number of people enjoying a liesurely Saturday morning. Women in kimonos, men with fancy DSLR cameras, children playing, and elderly people feeding the seagulls. You wouldn't suspect that two prefectures were essentially wiped out the day before from the scene. Getting closer to the station, I could see people coming out of a large electronics chain with new computers and other electronics. This could have been to replace broken equipment, but didn't look any different from a normal Saturday morning.

The people of Japan have an uncanny ability to appear normal in the face of tragedy like I've never seen before.

That said, once inside Ueno Station, an impenetrable wall of people waited (impatiently and otherwise) for the opportunity to walk through the gates and board a train. What struck me as amazing wasn't so much the thousands of people waiting outside the gates to enter, but the thousands standing on the platforms. There was no room to move, and people were well beyond the safety lines when trains pulled in. Those behind would sometimes hold onto the ones in danger of falling. It was a sight to behold. 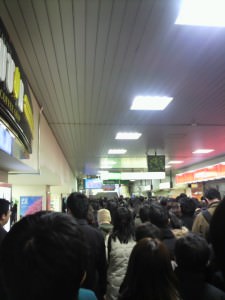 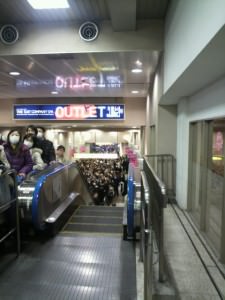 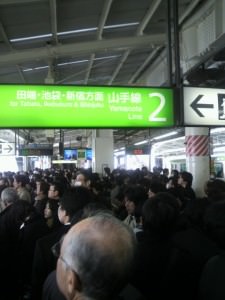 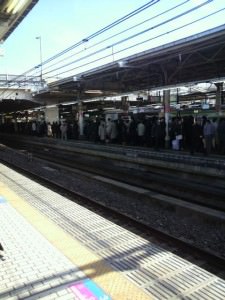 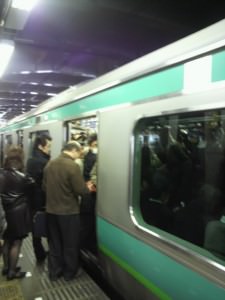 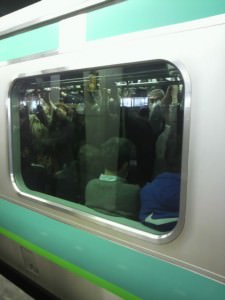 The trek home took a total of five hours, but Reiko and I were finally reunited outside of Kashiwa Station. Many people haven't yet been so lucky, making the moment much more significant. Hopefully everyone will get home before too long.

I've said many rather negative things about people's attitudes on public transport in Japan, but I've never seen people work so hard to get a country back on its feet after such an event. It's this kind of attitude that will ensure people who need the most help get it, and the rest of us will be available for support.