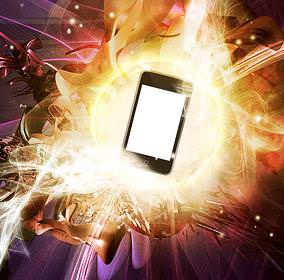 It seems that Apple, the perky company from Cupertino, has a little bit of an issue with some of the ultra-popular iPhones in Western Europe. According to several people in France and one in Belgium, their phones are overheating, starting fires, exploding, and even imploding. As a result of these reports, Europe’s oddly-named RAPEX (the Consumer Protection Agency) and France’s DGCCRF (the Consumer Affairs and Fraud organization) are now keeping an eye on the situation and, after a brief meeting with Apple France’s Michel Coulomb, they’ve decided to keep in touch to see how many more of these cases may occur in the future. However, despite the apparent severity of the claims, the root cause of these horrible events cannot be blamed on Apple. Instead, this is merely the result of a clash between the laws of physics and feng-shui.

Apple is a cool company that makes cool products for cool people. There’s no denying that Apple’s iPhone does get a little hot from time to time, but this is true for anything that packs as much awesome into such a small package. Neutron stars are a great example of this. While they’re nowhere near as hot as a common yellow star like our Sun, they still pack an incredible amount of power into a very small area. Considering how much energy they pack they really should explode, but they don’t. However, as a result of maintaining their shape, local space-time is warped and twisted in such a way that light itself begins to act in strange ways. The same is true for Apple’s products, though on a much smaller scale.

Interestingly enough, the heat produced by the iPhone is the result of Apple’s secret iForcefield technology that works hard to maintain the device’s structural integrity whenever it’s forced to do something that’s deemed uncool. Charging is uncool because we need use wires and physically plug the device into the wall. As a result, the phone gets hot trying to maintain its shape. When we’re out and about in the city with our trendy friends, the iPhone is cool both to the touch, and to everyone who sees it. As a result, the iForcefield doesn’t need to work as hard, if at all. Because the person is cool, the phone is cool, and the laws of physics are nicely balanced. No force field is required, and Feng Shui is maintained.

But if the Person Isn’t Cool…

Unofficial studies have shown that 44% of all French-speaking people are not cool. As a result, the iPhone’s iForcefield technology is regularly pushed to the limit. Unfortunately, this means that some iPhones will be unable to contain their awesomeness for any prolonged length of time. This is no different than trying to drive a Porsche at maximum velocity for weeks or months at a time; eventually, even a finely tuned engine will overheat and break down.

But what does this mean? It means that uncool people should not own an iPhone.

Sources tell me that Apple is hard at work to find a solution for this problem. Uncool people want to use iPhones, too, and Apple wants to accommodate their customers. However, the most likely solution will likely rile a bunch of feathers.

Windows Mobile on the iPhone? 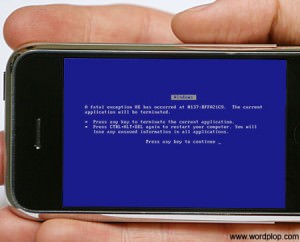 Because the amount of awesome contained within the iPhone is so great, Apple needs a way to make the device less awesome, and fast. The best way to do this would be to port Microsoft’s Windows Mobile OS, and install it on anyone’s machine that is reported to run too fast. This would allow those who are not as cool as regular Apple consumers to enjoy the design of the product, while also providing them the incentive to improve their image. Eventually, once a person’s cool factor has grown, the most current version of the iPhone’s firmware will be downloaded and installed.

Whether the ultra-secretive company will actually go down this road and install Windows Mobile on their customers’ phones remains to be seen, but one thing is for sure. Apple products are now appealing to a broad range of customers, not only the cool ones. As a result, the design and marketing geniuses in Cupertino need to find a way to control just how much awesome their products pack based on how cool each customer happens to be. Failure is not an option as it would mean the eventual extinction of every nerd, troll, and phreak on the planet.