Right Next to the Potato Chips... 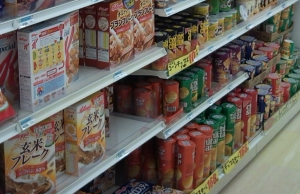 Living in Japan can be a lot of fun, but sometimes there can be some interesting differences between one's adopted home and natural home.  One such example would be Japan's understanding of cereal.  In Canada, cereal would be considered "part of a complete breakfast," whereas across the ocean a bowl of Special K or Corn Flakes is little more than a snack to tide someone over until dinner.

This becomes incredibly clear when visiting the local grocer.  Back home there would be an entire aisle dedicated to both adult and children's cereals.  In Japan, one would be lucky to find more than a few shelves containing half-a-dozen or so options.  And where are they?  Next to the Sun Chips.

This is my entry in Gakuranman's July Japan Blog Matsuri.